With a score of 19.5 points, the Wesel District Association left their fellow competitors trailing behind in the (Dressage) Quadrille Championships, the Prize of Handwerk, at the CHIO Aachen. Second place went to the four local matadors of the Aachen District Association under the direction of Sabine Rüben. Jennifer Bücken with Perry Dream, Vanessa Dornhöfer with Savoir Vivre, Ines Theelen with Dream Dancer and Simone Thies with Don Destello achieved a total score of 18.3 points. The team from the Mettmann District Association, comprising of team leader Chantal van de Griend and the riders Sarina Bamme with Egon Hurry up, Diane Bona with Lennox Luis, Patricia Knell with Fürst Finaldo and Stephanie Knell with Don Giovann finished third on a score of exactly 17 points.

Helmi Abeck from the winning team of Wesel District Association can’t even remember how often she has won the Quadrille Championships, the Prize of Handwerk at the World Equestrian Festival – “Often, lot of times!“ Today, she carried on the series of successes at the CHIO Aachen with her quartet, comprising of Lisa Behr with Waleika, Sina Döller with Genaro Royale M, Nathalie Overmann with Rolex M and Petra Wolf with Don Dooley.

In the Quadrille Championships the teams, each comprising of four riders, perform a freestyle routine at medium level they have choreographed themselves to the music of their own choice. Wesel’s team leader, Helmi Abeck, has pepped up the choreography over the course of the time, but the basic routine remains the same (“It works!”). This time she had three new riders in her team. They left themselves three weeks for practising, the team met up two or three times a week to rehearse. Above all that meant at the beginning: Practising the choreography on foot until the sequence of the movements became second nature. Then, they started practising on horseback.

In addition to the music and the choreographic design, an important factor for quadrille competitions is the elegant appearance of the horses and riders. They should harmonise well together and should all be dressed identically. For example, the quartet from Wesel all had Swarovski stones on their fly veils and in every second mane plait. Whether that had something to do with the team’s motto? Helmi Abeck admits that her team didn’t actually have a real motto. But after a moment’s reflection about the sparkling accessories of her riders she added: “Perhaps: ‘We are reaching for the stars’. It certainly worked. 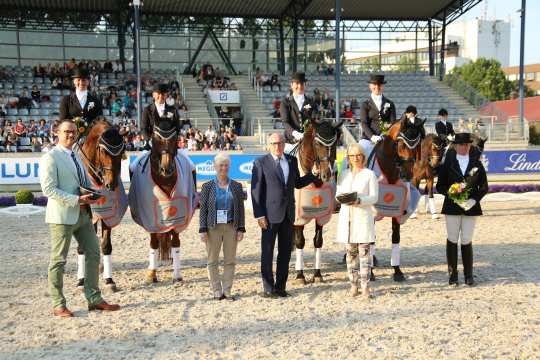