The first national anthem that was played at the CHIO Aachen today, was the German anthem. It was played for Philipp Weishaupt, who won the VBR Prize with a big lead, a two-phase jumping competition over 1.55 metre obstacles.


“That course was really high today,” Philipp Weishaupt summed up after the prize-giving ceremony for the VBR Prize. No problem for his 12-year-old Holstein-bred Lesson Peak. The Lord Z son was extremely fast too: He beat the rest of the field by almost two seconds. Weishaupt crossed the finish line in 35.08 seconds. Second place went to the Belgian rider, Yves Vanderhasselt with Hetman Of Colors, who also jumped clear in a time of 36.97 seconds, followed by Laura Kraut (USA) with Zeremonie (0/38.99).

In a two-phase competition, the jump-off is basically a continuation of the first round in one course. If a pair remains clear over the first part of the course, he simply carries on jumping the rest of the obstacles. The second half of the course is then ridden against the clock. The course itself was “almost like a standard course,” commented Weishaupt. But long, consisting of 14 obstacles. That was very strenuous in the heat! That is the advantage if one has a horse that is a little more temperamental by nature – like Weishaupt’s Lesson Peak: “In his case it is a fine line between genius and insanity,” his rider explained. The two of them have only been a pair for a few weeks. Weishaupt took over the gelding from a Canadian pupil of his employer Ludger Beerbaum and has already celebrated victories with him, among others at the CHIO Rotterdam. “But winning at home is always something different,” the two-time Rolex Major winner added, “and here in Aachen is always very special, regardless of which competition it is!” 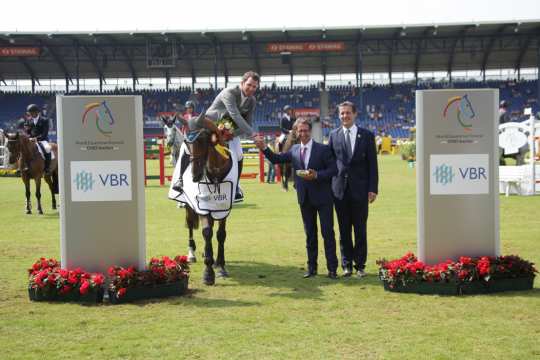 The winner is congratulated by Ralf Hündgen, partner in the law firm VBR, and Wolfgang Mainz, member of the ALRV advisory board.