The 20-year-old Alexander Housen had brought two horses along with him from Belgium. He won the first of two competitions in the NetAachen Prize with the Irish-bred mare, Rockwell RC, and came third with the AES-bred stallion, Warriors Glory. In-between the Argentinian flag flew for a rider, who actually also lives in Belgium: Richard Kierkegaard CHIO Aachen CAMPUS Excellence participant and the grandson of the founder of the Zangersheide stud, Leon Melchior. Kierkegaard had saddled the Swedish-bred grey gelding, Contiki.

The winner of the opening class of the NetAachen Prize, Alexander Housen, is one of the most aspiring youngsters in the jumping sport. He has been voted “Talent of the Year” several times in Belgium. Not without good reason – Housen already won team silver at the European Championships in the U14 age group. Then, in 2018 he claimed team gold at the European Championships with the Juniors. The following year he celebrated his second victory with the Young Riders team. Alexander Housen is one of the selected talents, who have been accepted in the Rolex Young Riders Academy, a promotion programme that has yielded many excellent riders, who later went on to excel in the Main Stadium at the Soers, for example Laura Klaphake.

The NetAachen Prize is a competition that was introduced in 2021 for young riders. 20 participants are invited to compete against each other in two up to 1.40 metre classes. 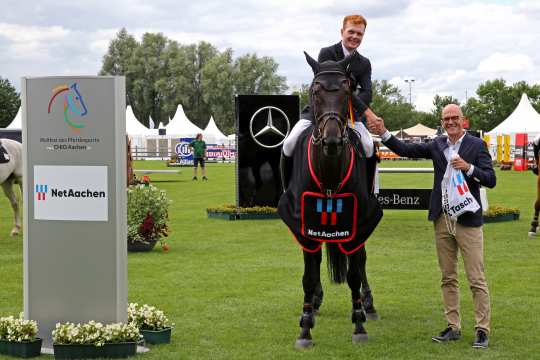