Prize of Family Richard Talbot went to the Australian driver, Boyd Exell, for the ninth time

The Dutch four-in-hand drivers and the DHL Nations Cup at the CHIO Aachen, go together like a horse and carriage. For the twelfth time in a row the Oranje drivers won the team classification.

Koos de Ronde and the father and son duo, Ijsbrand and Bram Chardon, claimed the DHL Nations Cup for the Netherlands with a huge lead: The trio finished on an overall score of 330.120 minus points compared to second place, which went to France on a score of 377.430 minus points. The French team comprised of Benjamin Aillaud, Thibault Coudry and Anthony Horde. The Belgian team finished third with 381.210 minus points thanks to Dries Degrieck, Glenn Geerts and Edouard Simonet – to the extreme disappointment of the German drivers!

The team of Karl-Heinz Geiger had worked their way up into third place during the Marathon yesterday, but today in the Boehringer Ingelheim-Prize Michael Brauchle, Mareike Harm and Georg von Stein they fell back into fourth place. (383.230 minus points): “We are very disappointed, coming under the first three would have been good – no, actually it should have been a must,” the national coach commented.

The obstacle driving competition, the Boehringer Ingelheim-Prize, which was also the concluding competition of the Nations Cup, was tough, especially since the time was tight. The French driver, Thibault Coudry, who also won the “Top Score” class, mastered the course best. Second place went to the Australian driver, Boyd Exell, followed by Jérôme Voutaz from Switzerland, who was part of the victorious team in the Lavazza-Cup yesterday with his four Freiberger horses.

The individual classification, the Prize of Family Richard Talbot went to the Australian driver, Boyd Exell, for the ninth time. Last year he had to bow down to Ijsbrand Chardon, and today he claimed the victory back. First in the dressage, third in the Marathon, second in the obstacle driving competition – nobody else could top that. On an overall score of 158.57 minus points, Exell asserted himself against Koos de Ronde from the Netherlands (164.10). Last year’s winner, Ijsbrand Chardon finished third (166.02). Mareike Harm was the best German driver in sixth place (188.11). 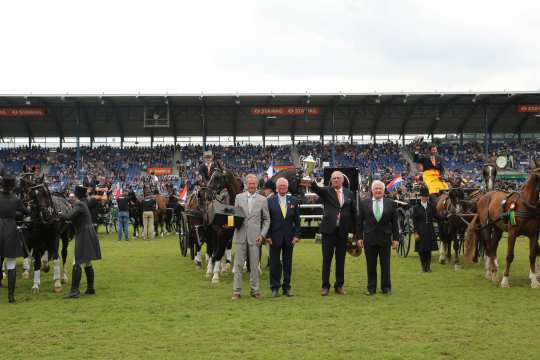