Germany’s national dressage coach, Monica Theodorescu, had every reason for joy this evening, after her protégés secured themselves the top three placings in the Grand Prix Spécial, the Lindt Prize.

Especially Frederic Wandres delighted the national coach today. After a practically immaculate test with his twelve-year-old Oldenburg-bred gelding, Bluetooth by Bordeaux, 75,638 percent lit up on the leaderboard, a new personal best. The success curve of the pair has soared upwards for months. Today, was the preliminary pinnacle. Monica Theodorescu raved: “Freddy has done everything right with all of the horses so far.” Because prior to that Wandres had already come third in the Grand Prix of the 4* Tour with Bluetooth, second and thus the best German rider in the Grand Prix for the Nations Cup with Duke of Britain and he also won the Prix St. Georges with Quizmaster. It hadn’t come as a surprise to her, said Theodorescu, “I know the horses, I know Freddy, we have been working towards this and I really enjoy working with him. We have a totally good, trusting relationship. He is very professional; he is good at putting things into practice and that was simply wonderful today!”

Not just the performance of Wandres and Bluetooth in the Deutsche Bank Stadium, but also those of the other two German riders. Namely, second place went to Benjamin Werndl and his 18-year-old, top-fit Westphalian-bred Daily Mirror by Damon Hill with a score of 73.936 percent, followed by Helen Langehanenberg with her Holstein-bred mare Annabelle by Conteur, who scored 72.681 percent. 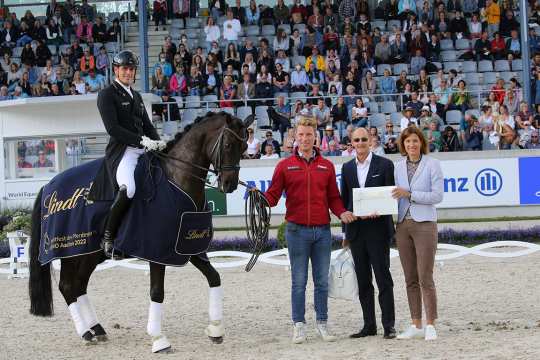