The WOTAX Prize goes to Michael Eilberg from Great Britain

The WOTAX Prize, the Intermédiaire I at the CHIO Aachen, the World Equestrian Festival, proved to be a special kind of battle of the sexes: on the one hand the light-footed, dancing mare, Woodlander Farouche, with the British dressage rider, Michael George Eilberg, and on the other hand the powerful, dynamic stallion Escolar with the master of riding, Hubertus Schmidt. In the end, the motto was once again this evening, ladies first. With a practically immaculate ride, the 10-year-old Woodlander Farouche, who was the World Champion of the Young Dressage Horses aged five and six, won the WOTAX Prize on a score of 76,632 percent.

Escolar came second with the master of riding, Hubertus Schmidt. The two of them made several mistakes in the test. But aged just seven, Escolar is still very young and it is his first ever season at advanced level. Today, he was awarded a score of 73.421 percent. But there is still lots of scope for more. Escolar is a horse with which Schmidt could possibly take part in the next Olympic Games with in Tokyo.

The Team World Champion, Helen Langehanenberg, was back at the Soers for this year’s CHIO. The rider from Münster impressed the crowd here in Aachen with Damon Hill in the Big Tour. Now, it was the turn for her talented young horse. He is called Suppenkasper and is a rather powerful, big gelding for the petite Helen Langehanenberg. Nevertheless, the pair still made a very harmonious team, their result 73.079 percent.

Ingrid Klimke, who competed with two horses in the DHL Prize this morning and officially found out today that she is on the eventing team for the Olympic Games in Rio, came fourth. Asked whether it wasn’t stressful to ride two horses in an eventing competition, after she had crossed the finish line. She replied, “No, not at all! I love riding! I’ve also got the Intermédiaire I on my agenda tonight.” For the latter, she saddled her mare, Geraldine, with whom she was already able to qualify for the Final of the Nuremberg Burg Cup this year, the German Championships of the 7 to 9-Year-Old Dressage Horses. Today, the pair were awarded 72.816 percent. 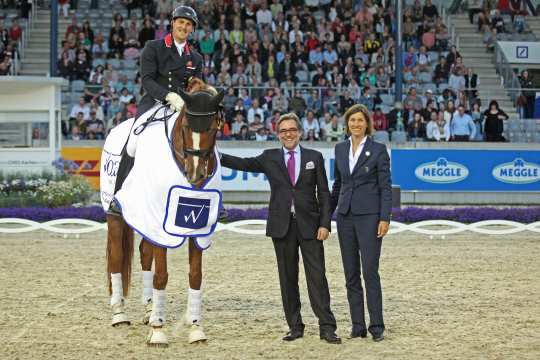