The second will be the first

Less spectators due to the social distancing regulations, but definitely just as much atmosphere – that is the conclusion after the first weekend at the CHIO Aachen 2021, when as usual the vaulters kicked off the show with the Prize of Sparkasse. And the athletes made sure the visitors had every reason to celebrate them.

Two important classes were on the agenda today – the Prize of Sparkasse in the Pas de Deux and the Nations Cup, in which two individual vaulters form a team together with a group.

The pairs in the Pas de Deux got the ball rolling and ensured a nail-biting competition! Two weeks ago, at the World Championships in Budapest, Janika Derks and Johannes Kay walked off with the title. And yesterday they also won the first of the two decisive freestyle competitions here in Aachen. Close at their heels at the World Championships and also here at the CHIO Aachen, were Chiara Congia and Justin van Gerven. Since they finished second yesterday, they had to perform as the second from last pair to go before Derks and Kay. They went all out with their tango freestyle. They really did celebrate a dance on top of their horse, Highlight, who was lunged by Alexandra Knauf. The judges rewarded their performance with an overall score of 9.013 and the spectators broke out in thunderous applause. But whether it would suffice? Janika Derks and Johannes Kay performed one difficult exercise after the other, however they still didn’t manage to top Congia and van Gerven, their score: 8.830. After calculating all of the results, Chiara Congia and Justin van Gerven ultimately finished first on an overall score of 8.855. Derks and Kay’s final score of 8.830 left them in second place on Humphrey Bogart, lunged by Nina Vorberg. Third place also went to Germany namely to Jolina Ossenberg-Engels and Timo Gerdes on Caramoe with Claudia Döller-Ossenberg-Engels at the end of the lunge (8.506).

Germany I and II unbeatable

Already in the run-up to the event it was clear that it would be difficult to beat the host teams in the Nations Cup. And indeed, the competition from the Netherlands, Great Britain and Russia tried in vain to top the teams of the national coach, Ulla Ramge. Germany I was made up of the same team members, who claimed gold at the World Championships in Budapest: Jannik Heiland and Janika Derks as the individual vaulters and Team Fredenbeck as the group. The constellation was able to impressively confirm its role as the favourites. Heiland and Derks received the highest individual scores (8.924 and 8.818), Team Fredenbeck was the best group (8.894). Their accumulative score of 26.636 thus brought them the clear victory.

The Corona regulations were of course also in place at the CHIO Aachen. Nevertheless, it still proved to be a first weekend full of highlights and emotions. Gesa Bührig, the lunger of Team Fredenbeck, summarised: “We are delighted that the competitions have started again and Aachen is a very special event. I hadn’t expected the mood to be so fantastic. We had heard beforehand that only 30 percent of the spectators would be allowed to attend and wondered whether that special feeling we have enjoyed over the past years here would arise. But they managed it and it was great. Running into this arena, was definitely special.” The runners-up could only confirm this. Team member Justin van Gerven: “We are very satisfied too. We are overjoyed at finally being back in Aachen again and at being able to enjoy this atmosphere. After this long Corona stretch it was really liberating vaulting in front of a crowd again.”

The Corona period was tough for the vaulters. Simply stopping and putting one’s feet up was no option for them, but training with the horses wasn’t allowed. So, they predominantly trained alone at home, reported Patric Looser, the chef d’equipe of Köln-Dünnwald’s vaulting club Norka. He also stated that it had also been difficult to find the right point in time when to work towards competitions. After all, nobody knew when the circuit would kick off again. This certainly curbed the motivation, said Viktor Brüsewitz from Team Fredenbeck. The lunger Barbara Rosiny emphasised the fact that particularly the horses need the competitions: “One keeps fit through the training. But this atmosphere – some of the horses really miss it. Especially when it is like here, when you run into such a full house that is raging, which is super fun, but if the horses haven’t experienced it for some time, it takes them a while to get used to it again. You simply can’t practice that at home.” 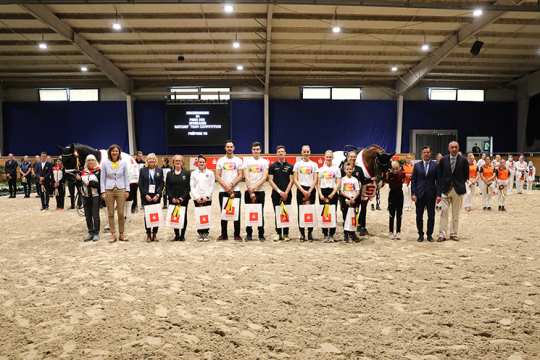 Congratulating the winning team are (from left): ALRV President Stefanie Peters, Dr. Christian Burmester, Vice Chairman of the Board of Sparkasse Aachen, and Hans-Joachim Erbel, President of the Equestrian Federation (FN).