The obstacle driving competition, the Prize of Euregio Maas-Rhein goes to Thibault Coudry

The four-in-hand driver, who aims to win the “Chase for Points”, the Prize of Euregio Maas-Rhein, not only has to be good at driving, but also good at maths. Today, the expert here proved to be the French driver, Thibault Coudry.


The right tactics were called for among the four-in-hand drivers in the “Chase for Points”, the Prize of Euregio Maas-Rhein. In the competition the drivers can choose the order of the obstacles themselves. Each obstacle has a certain amount of points, which correspond to the obstacle’s degree of difficulty, but only if the driver doesn’t pick up any faults. What’s more, there is also a joker, a particularly risky obstacle, which if driven clear brings the driver 200 points. But beware! If the driver makes a mistake here, 200 points are deducted. In the end the driver, who collects the most points in the fastest time, wins.

Today, that was France’s Thibault Coudry. The 39-year-old is very familiar with the Aachen Soers. He competed here for the first time during the World Equestrian Games in 2006, as the youngest participant at the time. Today, he benefitted from the experience he has gained since: He namely successfully drove through the joker obstacle twice. That helped him notch up a total score of 1870 points, more than any of his fellow competitors.

Three drivers finished on a score of 1730 points. Boyd Exell (AUS), who already won the two previous driving tests, recorded the fastest time of the three, which meant he secured second place, followed by the Belgian driver, Edouard Simonet and Anna Sandmann in fourth place as the best German driver.

Karl-Heinz Geiger was particularly impressed by Anna Sandmann’s performance. Apart from the winner, she was the only driver who dared to take the joke twice and whose courage was rewarded for doing so. Two further German drivers, Mareike Harm and Georg von Stein, also came under the top ten, ranking eighth and ninth respectively. 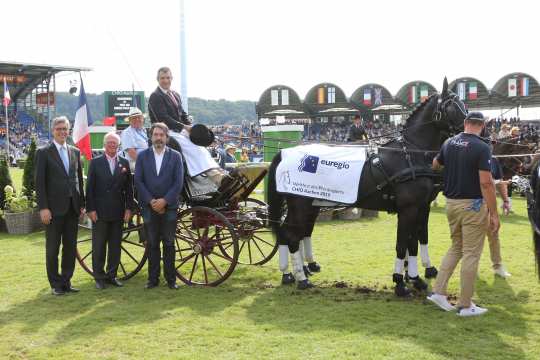