The US American Kent Farrington is number one in the world rankings of the show jumpers and is well-known for his fast jump-offs, which he impressively demonstrated in the Prize of North Rhine-Westphalia.

Where others hesitate, Kent Farrington puts his foot down again. And with the 16-year-old KWPN gelding, Uceko by Celano, he has a horse that suits such tactics perfectly: “He has a big canter stride and can take any obstacle at full speed,” was how Farrington described the advantages of his grey gelding. “That is why grass arenas like this one suit him well.” And so the actually rather small and non-conspicuous gelding claimed his first big victory in Aachen in the Prize of North Rhine-Westphalia. In the second round the time on the clock stopped for the pair at 46.65 seconds. If Farrington has his way this was just the start – after the subsequent press conference, he asked the Show Director, Frank Kemperman, to leave his name sign up on the podium for the next competitions to come…

Second place in the highlight in the jumping stadium on the CHIO Friday, went to Christian Ahlmann, which was a nice consolation for his otherwise modest start to the show. Namely, on Wednesday, he and his 17-year-old successful horse Taloubet Z – like several other colleagues – fell victim to the storm that exploded over NRW. Taloubet was so shocked that he refused the water jump twice, which is totally untypical for this Galoubet A son, with whom Ahlmann has more or less won everything. “It was such a shame! He is in great form, he’s like a young horse. And I had so much been looking forward to this weekend!” Quite rightly so, as he proved today with a clear round in 47.14 seconds.

Third place went to the German Champion Simone Blum at her Soers debut, the clock stopped just six hundredths of a second behind Ahlmann. After her top horse, the ten-year-old Askari daughter DSP Alice sustained an injury at another show, Blum’s first appearance in Aachen was up in the air. So, she was all the more lucky that she was ultimately able to compete here and collect today’s white ribbon. Despite the fact that her chestnut mare was totally overwhelmed by the setting on the warm-up area, as her rider revealed. “But she really enjoyed the prize-giving ceremony!” And that is the main thing! 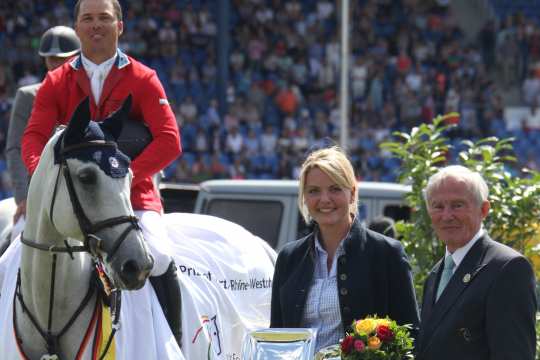