The Danish rider, Cathrine Dufour and her long-standing successful four-legged partner, Cassidy, were favourites to win the LUMILEDS-Prize, the Grand Prix Freestyle of the CDI4* Tour. And that’s precisely what they did and had a great deal of fun to boot.

“He was like a five-year-old again today,” laughed Cathrine Dufour after finding out that she had claimed the victory in the Grand Prix Freestyle, the LUMILEDS-Prize, with Cassidy and the freestyle choreography that already brought the pair the bronze medal at the European Championships in Gothenburg. Their score today 83.460 percent. “He performed the piaffe as if he hadn’t done it for ages.” She and the meanwhile 16-year-old Caprimond son have been a team for nine years. However, there are moments when Cassidy still manages to surprise his rider: “I think he just wanted to make sure the spectators had a great evening tonight,” the Danish rider grinned. “He simply wanted to march off, I had to really slow him down. And now we have won in Aachen. It is fantastic!”

As in 2018, Ingrid Klimke came second with Franziskus, who made expensive mistakes in the one-tempi flying changes today. The judges awarded the pair 78.945 percent for their performance. Ingrid had to do one extra flying change tonight too, out of her eventer’s clothes into her tails, she namely took part in the Lavazza Cup shortly before her appearance in the dressage arena! 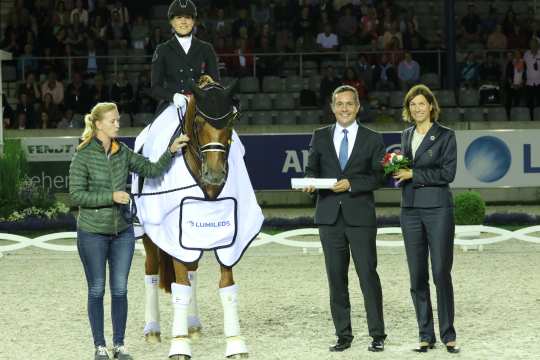 The winner is congratulated by Marc Beckers, HR Director Lumileds Germany & Austria and Stefanie Peters, memeber of the ALRV advisory board.