The dream of the holy grass

Big name, big success: Thibault Philippaerts has won the NetAachen Prize at the Aachen International Jumping. The competition for Young Riders came to a nail-biting close in a top-class jump-off. And by the by the journalists learnt that the Show Director, Frank Kemperman, once chased Philippaerts from the holy grass in the Main Stadium as a young lad.

On the sand footing of the Deutsche Bank Stadium, where the dressage riders are at home during the CHIO Aachen, the result in this star-studded competition for aspiring young show-jumpers was a pre-announced Belgian double victory. Philippaerts in the saddle of Laurier and the runners-up on Sunday Dieter Vermeiren with Kingston Town Z had consistently performed well since Friday, so their top placements didn’t really come as a surprise. Nor did the strong performance of Mylen Kruse with Chaccmo, who finished third. For her Aachen seems to be a lucky show, she completely dominated the Aachen Youngstars 2019 namely and claimed the “Young Riders Champion” title in the proceeds.

Even as a young boy Thibault Philippaerts already knew exactly where he was headed: On the grass arena in the middle of the Main Stadium of the CHIO Aachen. “Is has always been my dream to compete there,” the 18-year-old stated after his quick winning round on Sunday. He actually did manage to get there once, albeit on foot without a horse. The second youngest of the four sons of the Belgian riding legend, Ludo Philippaerts, once wanted to accompany his father while walking the course, however before he reached his father, the CHIO Aachen Show Director, Frank Kemperman, chucked him straight out again. The two of them had a good laugh when they told this story on Sunday. Now after his triumph in the NetAachen Prize, Thibault can refer to himself as a winner of Aachen. “That feels great,” he said. And his dream of riding to victory on the holy grass at the CHIO Aachen still remains intact, of course.

Eleven pairs had reached the jump-off on Sunday morning, Dieter Vermeiren and his Kingston Town Z were the second fastest pair in the ring. Vermeiren won the opening class on Friday and came second on both Saturday and Sunday – “a perfect weekend for me,” commented Vermeiren, who particularly raved about the atmosphere: It is simply Aachen here, it is super to be here.” Mylen Kruse was left with mixed feelings: “I am delighted and I am totally proud, but of course one does actually aim to reach the top step of the winners’ podium.”

“These young people here are the stars of the future,” stated Frank Kemperman, Show Director. “One day we will watch them 150 metres further west of here on the grass ring in the Main Stadium.” The organisers have been placing an emphasis of their work on the youth for many years already. For instance, the “Aachen Youngstars” for dressage riders and show-jumpers will be organised again in the winter and U25 competitions for aspiring young talents are already a fixed item on the programme of the CHIO Aachen. Recently the “CHIO Aachen CAMPUS” project was presented, the youth work is also an important element of this project. 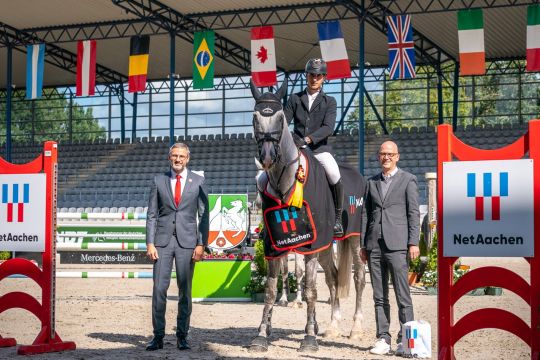