The Swedish royal couple didn’t miss out on the opportunity of this very special CHIO Aachen appearance: When the Swedish superstar of the Eurovision Song Contest, Måns Zelmerlöw, performed at the “Media Night” in the late evening, their Majesties King Carl XVI Gustaf and Queen Silvia of Sweden were still present.

Several hundreds of guests celebrated at the traditional gala evening during the CHIO Aachen in the “Champions’ Circle” at the traditional showgrounds in the Soers of Aachen. In addition to the royal couple, further celebrities such as Princess Benedikte of Denmark and the President of the European Parliament, Martin Schulz, had accepted the invitation of the CHIO Aachen organisers. The co-host Hermann Bühlbecker brought the actress Bo Derek to Aachen with him. Previously, the guests from public life as well as the sports, politics, business and media sectors had watched the spectacular Opening Ceremony that was dominated by this year’s partner country, Sweden, in the almost sold-out Main Stadium together with just under 40,000 spectators. Amid the exceptional CHIO Aachen atmosphere the guests then carried on celebrating until the late hours while enjoying the exquisite catering of “Do&Co” from Vienna. 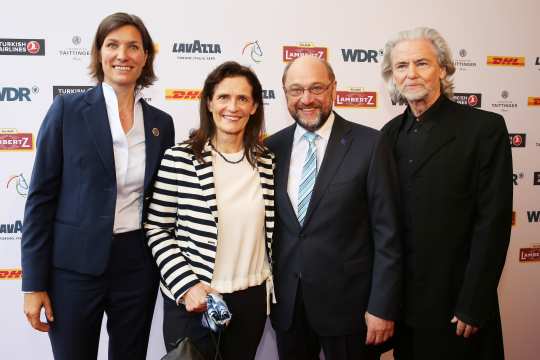 President of the EU Parliament, Martin Schulz, who visited the traditional Media Night together with his wife, Inge. The couple were welcomed by Stefanie Peters, Supervisory Board member of the Aachen-Laurensberger Rennverein e.V. and co-host Hermann Bühlbecker, Executive Director of the Aachen Printen and Chocolate Factory, Henry Lambertz.