Today, in the Prize of Sparkasse the compulsory and technical tests were on the agenda for the participants in the CVIO Aachen 2018, the Nations Cup of the vaulters. German athletes are occupying the top three rankings in both the ladies and men’s classifications after the first two competitions. They are also heading the field in the group classification so far too.

World-class vaulters from eleven nations are taking part at the CHIO Aachen, among others from Australia and the USA. Germany’s national coach, Ursula Ramge, knows that this together with the high level of sport and the setting here in Aachen also proves to be a psychological challenge for her athletes: “There is a lot of pressure here!”

As always, the competition started with the compulsory and technical tests. In the compulsory test the vaulters have to perform a row of exercises in a pre-determined order. In the technical test five exercises are stipulated that have to be shown. The vaulters can however combine these freely, so it is similar to a small freestyle routine. The actual freestyle competitions then ultimately decide which athletes are celebrated as the winners in the Prize of Sparkasse 2018.

The defending title holder in the ladies classification, Kristina Boe, didn’t have a problem with the high pressure mentioned by Ursula Ramge. With her trusted partner, Don de la Mar, lunged by Winnie Schlüter, the casualty surgeon already won the World Cup Final in Dortmund in the summer. The trio were able to maintain this top form: Second place in both the compulsory and technical test, meant she is currently in the lead in the intermediate result on a score of 7.913.

Janika Derks, who was one of the pillars of the highly successful group of RSV Neuss-Grimlinghausen for years and who is now pursuing her career as an individual vaulter, is currently close at her heels on a score of 7.652. She clearly won the compulsory test with Carousso Hit, lunged by Jessica Lichtenberg, but lost points in the technical test – more than tenth place was not possible today. The national coach Ursula Ramge explained: “Janika has always been absolute top in the compulsory test. In the technical test one exercise didn’t go so smoothly and she couldn’t find her way back into the flow of things. That is a learning effect that we pick up from such competitions: namely learning to concentrate on the next task immediately after a small mishap.”

After consistent performances – third place in the compulsory, fourth in the technical test – Sarah Kay with Sir Valentin lunged by Dr. Dina Menke rounds off the German trio heading the table in the ladies competition. Kay has currently notched up 7.618 points.

Brüsewitz in the lead again

Aachen seems to be Thomas Brüsewitz’s show. In 2016 he won the Prize of Sparkasse, he repeated the victory in 2017 and if he continues his current performance, he will go down in the Yearbook as the winner in 2018 as well. On his trusted partner, Danny Boy, lunged by Patric Looser (the one-time World Champion) the 24-year-old clearly won the compulsory test, so that third place in the technical test sufficed to comfortably take the lead in the interim overall result on a score of 7.953.

In second place with a score of 7.877 is Jannik Heiland with Dark Beluga lunged by Barbara Rosiny. The result in both competitions of Thomas Brüsewitz’s training partner was second place.

The co-favourite, the current World Cup winner, Jannis Drewell, who took the European Championship title here in Aachen already three years ago, won the technical test, but didn’t score enough to make up for the points lost after coming fourth in the compulsory test – the interim result: third place with a score of 7.758 on Qualimero, who Jannis’ mother, Simone Drewell, knows how to present impressively.

In the past years Team Norka from VV Köln-Dünnwald had to make do with second place in the Prize of Sparkasse behind RSV Neuss Grimlinghausen. This year the team from Neuss is not competing and the club from Cologne were only too pleased to fill the gap. After the compulsory test of the group classification, the team lunged on Picardo by Patric Looser are in the clear lead. The four judges awarded the team a score of 7.362.

The group currently ranking second on a score of 7.082 is the Austrian team from UVT Eligius with Leokado lunged by Cornelia Trimmel. The second German team, Fredenbeck I, is currently lying in third place with Wizaro lunged by Gesa Bührig. 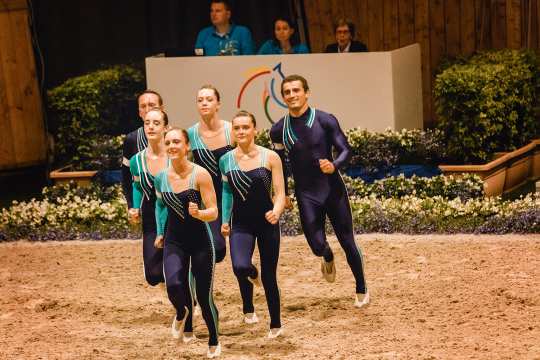