Ten days of sport and show: The CHIO Aachen 2016

“It should suffice for the top 10. I actually think I could make it under the top 5. To be honest: the top 3 would be super.“ Dressage shooting star, Sönke Rothenberger, made everyone laugh when he described his goal just before the CHIO Aachen gets underway. Next to him on the podium: His show-jumping colleague Christian Ahlmann, who succeeded in winning the Rolex Grand Prix, the Grand Prix of Aachen in 2014.

Following tradition, the organisers presented figures, facts and news on the World Equestrian Festival at the Town Hall in Aachen shortly before the start of the CHIO Aachen (July 8th-17th, 2016). Together with the equestrian athletes, the host; the Lord Mayor, Marcel Philipp; Carl Meulenbergh, President of the Aachen-Laurensberger Rennverein (ALRV), organisers of the event; Show Director, Frank Kemperman and the General Manager of the Aachener Reitturnier GmbH, Michael Mronz, informed the press about the coming days.

“It is simply the best thing in the world to enter the stadium and ride in front of this crowd,” is how Ahlmann summed it up in a nutshell for all of the athletes. Of course, he remembers all too well his big victory two years ago and would definitely like to repeat this triumph more than anything else: “I am top fit, my horses are in excellent condition, I am hugely looking forward to Aachen,” said Ahlmann, whose aim is not only to win the Rolex Grand Prix, but also the Mercedes-Benz Nations’ Cup:

The just 21-year-old, Sönke Rothenberger, already put in a very convincing performance in Aachen last year. Like Ahlmann, he too is extremely impressed by the atmosphere in Aachen:

Carl Meulenbergh, President of the Aachen-Laurensberger Rennverein (ALRV), organisers of the CHIO Aachen, is especially looking forward to one guest: “On Friday afternoon, we are organising a gala in tribute of Hans Günter Winkler, I am eagerly looking forward to this fantastic sportsman and the show in his honour.”

The Hans Günter Winkler Gala (15.7., 3 p.m.) is not the only event in the supporting programme. The traditional Media Night, “which will be attended by the Swedish Royal couple as well as numerous guests from the worlds of politics, media, sports and society, will begin shortly before the Opening Ceremony (Tuesday, 12.7., 8 p.m.),” reported Michael Mronz, General Manager of the Aachener Reitturnier GmbH. The Deutsche Sporthilfe (German Sport Aid Fund) has decided to award the famous “Golden Sport Pyramid” at the CHIO Aachen this year. The CHIO Aachen has been a traditional event since 1898, which is continually further developed without losing its original soul: “However, the DNA of the show will always remain to be world-class sport,” confirmed Mronz.

Since on the equestrian sport scene nothing beats making it on to the winners’ board of Aachen, as Hans Günter Winkler once put it. With 540 horses, 403 athletes from 29 nations will be attempting to do just that this year. The overall prize-money of the CHIO Aachen is just under 2.7 million Euros.  “First of all CHIO, then RIO,” is how Frank Kemperman, the Show Director, explained the sporting standing of the event this year, because Aachen is the last and decisive qualification for the Olympic Games in Brazil for many nations.

But the show is not only exceptional in terms of the sport – the entire top 10 of the show-jumping world ranking list have confirmed their participation – the Opening Ceremony on the evening of the 12.7. is also going to be unforgettable: There is never been such an Opening Ceremony like this one before at the CHIO Aachen,” promised Kemperman.

Tickets are still available for all disciplines, only the odd category here and there is already sold out. Tickets can either be ordered from the hotline (+49-(0)241-917-1111) or online 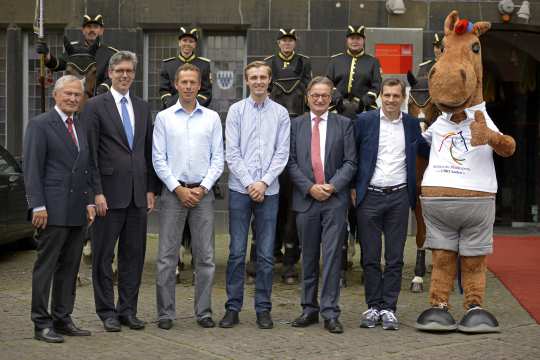