Swedish royal couple celebrated on the market square in Aachen

This year’s CHIO Aachen gained momentum today with a royal visit to the Town Hall in Aachen and a magnificent parade of horses and carriages through the city centre to the market. The Aachen-Laurensberger Rennverein (ALRV) was able to win over Sweden as the partner country for the “CHIO Aachen 2016”, the Swedish royal couple also accepted the invitation to the World Equestrian Festival.

This is how it came about that this evening his Majesty King Carl XVI Gustaf and her Majesty Queen Silvia of Sweden were standing on the gallery of the Town Hall staircase, waving to the approx. 2,500 people on the market square in Aachen amid beautiful summer weather and enjoying the performances on the marketplace. In addition to their Majesties, who entered their names into the Golden Book of the City of Aachen during a reception, the Prime Minister of NRW, Hannelore Kraft, and the Swedish Ambassador, Lars Danielsson, were also present. On behalf of the hosts, the Lord Mayor Marcel Philipp and ALRV President Carl Meulenbergh welcomed the guests of honour and the audience on the market square.

The performances of among others the Music Corps of the Royal Fire Brigade and the Swedish Royal Mounted Guards lasted around an hour. Musicians and dancers from the Dalarna Province added a folkloristic touch. Furthermore, striking and wildly applauded: the Vikings on their Island ponies, the Pony Express and the Swedish knights. 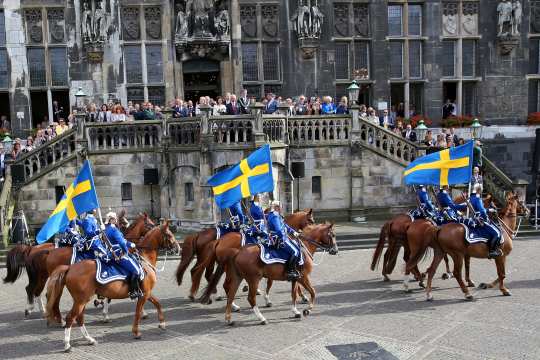 Magnificent parade of horses and carriages on the market place in the city centre of Aachen.