The course in the STAWAG Prize was certainly tricky, admitted the US rider, Elizabeth “Beezie” Madden. Whereby she excelled in mastering the challenges at hand.

The two-time team Olympic gold-medallist, who had saddled the Quintero son, Breitling LS, crossed the finish line almost three seconds faster than her fellow competitors. The guests from overseas sped over the course with a clear round in 66.01 seconds. “I love Aachen, it is always an honour to ride here. And winning here is something very special,” commented Madden.

The currently extremely successful, Felix Haßmann, who had saddled his Westphalian-bred stallion Balzaci, whom he steered to two Grand Prix victories at the last two shows, followed in second place after jumping clear in 68.59 seconds.

Third place went to a further rider from the USA, Laura Kraut, with the KWPN mare, Whitney, an Indoctro daughter, who crossed the jumped clear in 69.86 seconds.

Tebbel and the Hanoverian-bred Calmé daughter, Camilla PJ ranked sixth. Laura Klaphake and Silverstone G by Diamant de Semilly finished eighth. In the morning, the co-national coach, Heinrich-Hermann Engemann, had raved: “It is a feast for the eyes to watch how they jump!!” Obviously it not only looks great, they are very successful too! 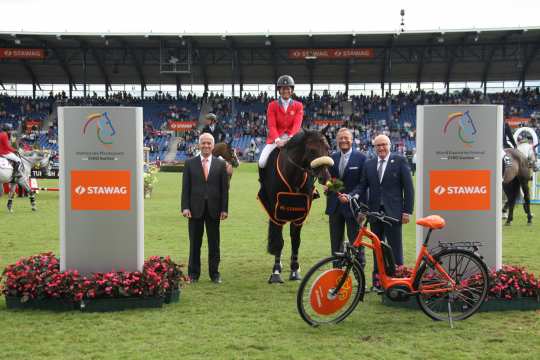