Admittedly: The parallels to the Woodstock-like circumstances when a wild festival was celebrated in the traditional CHIO Aachen Main Stadium in 1970 may be slightly far-fetched. And yet Uwe Brandt, director of the CHIO Aachen Opening Ceremony, grinned when he recalled those wild times, when he presented a few highlights of the show during a press meeting on Friday afternoon.

After all, the motto of this year’s Opening Ceremony on Tuesday, (June 28th, 8 pm) is “Welcome to the Festival”. And just like 50 years ago, the evening at the CHIO is going to be colourful and merry, loud and exciting. Brandt promised a true pageant with 200 horses, 500 extras and plenty of music. The “COURSE” jumpers of the “FlyGuys” from the Ruhr district will climb, fly and jump up, next to and over a stage, trampoline artists will spin around in the Soers skies and there are going to be horses galore, of course. It hadn’t been possible to go out and celebrate for far too long, Brandt stated, and promptly invited the people “to come along, meet up and celebrate with us!”

Marga Render, the choreograph of the show sent her dancers along to the press meeting to give everyone a foretaste of what awaits us. The dressage superstar, Isabell Werth, and her “Bella Rose” are also expected in the stadium, together with the Olympic gold medallist, Julia Krajewski, and the record holder in Aachen, Ingrid Klimke. The two eventing starts will take on two of the “COURSE” jumpers. The same distance, the same course – with and without a horse. “The Opening Ceremony has long since been a huge highlight!” exclaimed Frank Kemperman, Chairman of the Aachen-Laurensberger Rennverein e.V., organisers of the CHIO Aachen. The superstar, Wincent Weiss, sent his greetings in video format: “I am totally looking forward to the CHIO, I have already heard so much about the fantastic atmosphere in the Main Stadium,” Germany’s currently most successful singer stated. Incidentally, one of his songs is called “Fireworks” – that part will of course be easy to orchestrate.

“We want to create lots of special moments,” continued Brandt. Among others there is going to be the world premiere of the CHIO Aachen Song. Composed and performed by the “Höhners” during the Opening Ceremony. “The CHIO Aachen is fantastic,” the lead singer, Henning Krautmacher, said, “so it was high time for an anthem.” The long-time singer will be giving his last performances at the end of the year, “Frank Kemperman and I are both going into retirementthen,” the most famous man from NRW with a handlebar moustache, said laughing. “Then we are going to found a boy group,” Kemperman smirked in reply. It is also going to be the last CHIO for the long-serving Show Director. Krautmacher’s successor is Patrick Lück, the two of them have both been performing on stage together for months already. “Sports events are always something very special,” Lück explained, “because they are accompanied by very strong emotions, the sweet anticipation is immense.” The CHIO song will also be emotional. “CHIO without emotions is impossible,” grinned Höhner’ keyboard player, Micki Schläger, who always used to sit on the stand in the Main Stadium next to his mum. He recalls how she used to press his arm hard when the show-jumpers took the turn to the last fence. “The atmosphere here is unique, we want to capture precisely that with our song,” commented Schläger.

The meeting was rounded off by good news from Frank Kemperman: Tickets are still available for the Opening Ceremony, albeit not for all categories. Tickets can be ordered online at chioaachen.com or from the hotline on +49-(0)241-917-1111. Of course, also for the other days of the show, because as Kemperman noted: “The Tuesday is the prelude of a super week with top sport at the highest level.” 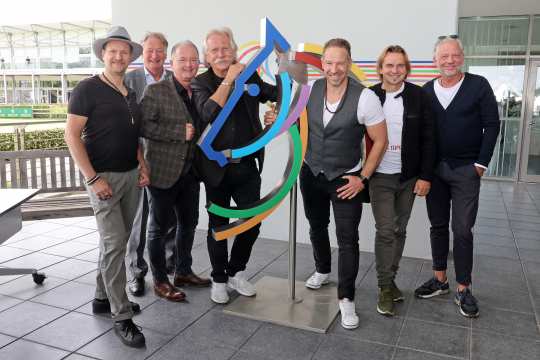