Special and unique from the very start

The question is repeatedly posed: What makes the World Equestrian Festival, CHIO Aachen, which begins the weekend after next, so special and unique? Ludger Beerbaum once answered: “There have been so many attempts to describe Aachen, whether it is hailed as the Mecca or Wimbledon of equestrian sport. This atmosphere, this whole flair over the days of the show, the special stadiums, the spectators – all of this is what makes Aachen simply Aachen.” Hence, for the successful show-jumper from Riesenbeck the CHIO Aachen is so special and unique because of the tradition and the given conditions.

Taking a look back at the past helps one understand the tradition of the CHIO Aachen better. In “L’Anneé Hippique”, the Year of the Equestrian Horse that appeared for the first time in 1943, one can read about the 31st edition of the CHIO Aachen in the issue from 1967/68: “The world equestrian get-together at the Soers took on a high standing among the ranks of the major classic, international equestrian encounters in the world from the very onset. Every year new written or verbal statements are heard that award the CHIO in Aachen first place in the rankings.”

The author of the report at the time didn’t consider it to be an expression of over-exaggerated national emotion or arrogance “if he certified the Aachen-Laurensberger Rennverein and its highly-deserving, long-standing President, Albert Servais, re-founder of the CHIO Bad Aachen after the last war and honorary citizen of his home town, that once again the CHIO had been successful in retaining the character, form and contents of a true World Equestrian Festival.” The show was described 50 years ago as an “equestrian manifestation at the highest international level, which with its wide-reaching charm made an inestimable contribution towards international understanding and reconciliation beyond its pure sporting significance.”

The same is still true today: Whether in the jumping, dressage, driving, eventing or vaulting – the sport-related standing of the CHIO Aachen is incomparably high. That is the basis and pre-requisite for that fact that in the meantime around 350,000 spectators from all over the globe attend the official equestrian show of the Federal Republic of Germany at the Soers year after year. In the light of the global show circuit, the nation-connecting aspect of the World Equestrian Festival has nevertheless changed. Today it is considered to be a matter of course that sport horses travel from country to country and from continent to continent. Teams from a wide range of countries are an everyday occurrence in the Nations’ Cups too, which are broadcast by the media directly in the participants’ native countries. After Aachen, the legs of the prestigious “Rolex Grand Slam of Show Jumping” are accordingly Spruce Meadows (Canada), Geneva (Switzerland) and `s-Hertogenbosch (the Netherlands).

The special presentation of countries and their horses has been taking place at the Soers since 2001 in the form of colourful and moving show performances integrated into the supporting programme. This year the partner country is the Netherlands, which will present its traditions, its horse breeds and thus also its impressive Friesians. Horses have accompanied people for thousands of years. The supporting programme of the CHIO Aachen clearly underlines this over and over again – and thus firmly has its finger on the pulse. The horse is a partner for sporting and leisure activities, and of course also at work. And whichever activity is being carried out, the well-being of the animal is paramount.

As such, the first-class sport, the colourful supporting programme, the spectacular Opening Ceremony, the heart-twinging Farewell of the Nations, the CHIO Aachen Village with all of the chic sales stands turn the show into a multi-faceted event. Into an event that touches people emotionally at all kinds of levels, involves and brings together people from near and far and which enables the direct interaction with each individual visitor thanks to the latest technology. This is unique in the equestrian sport.

“The initiators of the Aachen-Laurensberger Rennverein themselves certainly acknowledge such praise gratefully, but not without being aware of the obligation that goes with it, in other words not to refrain from doing anything that is necessary every year to make sure the event is an honourable success.” This statement is 50 years old, it can be read in the “L’Anneé Hippique” on the CHIO of 1967. What was written back then is still valid today. Tradition is groomed at the CHIO Aachen and conscientiously further developed based on the knowledge of the values handed down. This too is what makes the CHIO Aachen at the Soers so special and unique. 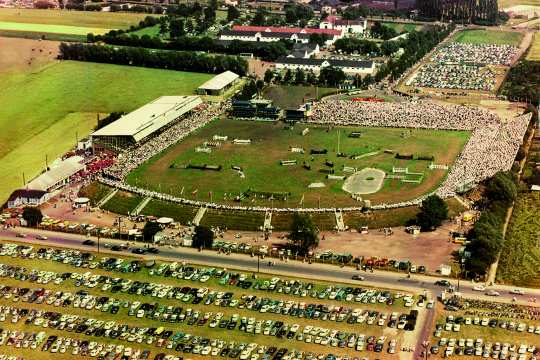 An aerial photo of the showgrounds in the 1960s. (Photo: CHIO Aachen archive).download