Before the CHIO Aachen, the World Equestrian Festival was officially opened in the presence of the Swedish royal couple, the young horses took to the Holy Grass at the Soers for the first qualifier in the Sparkassen-Youngsters-Cup. Spain’s Sergio Alvarez Moya and the 8-year-old French-bred mare, Unicstar de l’Aumone, were unbeatable and the pair took the victory with a lead of a good two seconds.

Even Italy’s “Master of faster”, Emanuele Gaudiano, who won the previous competition hands down, couldn’t match the super time of the Spanish rider. However, this could all change, once Gaudiano and the 7-year-old gelding, who was bred at Paul Schockemöhle’s famous Lewitz Stud, get to know each other a bit better. Namely, Aachen is only the duo’s second competition together.

The best German rider was Christian Kukuk, who is a professional rider at the stables of the legendary show-jumper, Ludger Beerbaum. Kukuk finished fourth with the also just 7-year-old mare, Darc Horse.

The youngster competitions are enormously important for the show jumping sport – especially at the CHIO Aachen. The Olympic team gold medallist, Marcus Ehning, explained: “Aachen is totally different to the other shows. The atmosphere, the distances – the young horses first have to get used to all this. For them it is an absolute highlight and a must so that they can gain experience, for when they compete here in later years.” And ultimately every show-jumper hopes his horse will compete in the Grand Prix of Aachen one day.

Incidentally, the Sparkasse not only thought about the riders, but also about the horses’ grooms. They are the helping hands behind the scenes, who are committed to the well-being of the four-legged stars, 24 hours a day. The Sparkasse honours this commitment with honorary prizes for the grooms of the horses that come under the top five. They received a Giro card loaded with electronic money that they can use to pay for things at the Aachen showgrounds. 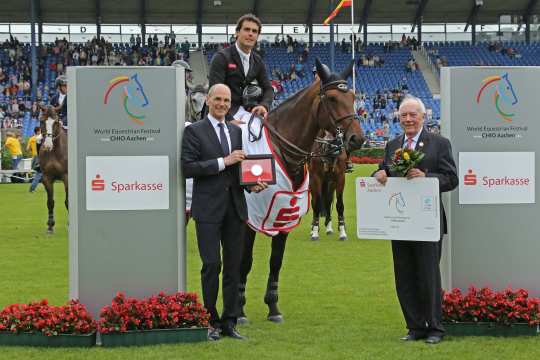 Hans Kauhsen, member of the ALRV supervisory board and Ralf Wagemann, member of the managing board of the Sparkasse, gratulate the winner. Foto: CHIO Aachen/Michael Strauch