Top stars in an Olympic light

When the best riders in the world take part at the famous CHIO Aachen from July 8th-17th, by way of exception some of them will have another sporting event in mind: The Olympic Games in Rio de Janeiro. Because for most nations the decision will be taken at the traditional Aachen Soers showgrounds as to which athletes will be representing their country in Rio. That was reason enough for the makers of the “CHIO Aachen Magazine” to portray three of the German top athletes in an Olympic light. The photo shooting took place with the number one in the dressage world ranking list, Kristina Bröring-Sprehe, the eventing super star Ingrid Klimke (number 6 in the world ranking list) and the number 2 in the jumping world ranking list, Christian Ahlmann, in the run-up to the CHIO Aachen.

The CHIO Aachen magazine is out at the beginning of June. It costs 6.50 Euros and is sold at the offices of the CHIO Aachen. All information regarding subscriptions (11.50 Euros/year plus postage) is available per email from the Aachener Reitturnier GmbH:conny.muetze@chioaachen.de. 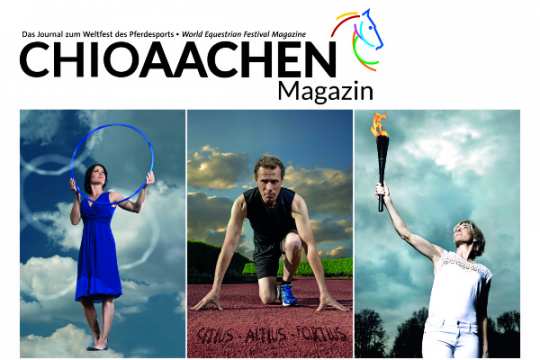