Shop-window Competition 2017: With windmills, clogs and Karli on the way to victory

No, Aachen didn’t become part of the Netherlands over the past weeks. Even if one could have got that impression. Because many shop-windows in the city and around the region of Aachen are flying the flag of our direct neighbours.

No, Aachen didn’t become part of the Netherlands over the past weeks. Even if one could have got that impression. Because many shop-windows in the city and around the region of Aachen are flying the flag of our direct neighbours.

And naturally that of the World Equestrian Festival (July 14th-23rd) too. The inhabitants of Aachen know immediately what is going on: The shop-window competition that gets everyone in the mood for the biggest equestrian sport event in the world prior to and during the CHIO Aachen, has begun. In this way, year after year visitors from near and far can enjoy the equestrian sport passion that is also shared by the business world.

This year, the shop-window competition took place for the 25th time. 70 shops followed the invitation of the initiators the Zeitungsverlag Aachen, MAC (City Market & Campaign Committee e.V.), the Aachen-Laurensberger Rennverein e.V. and the City of Aachen, to take on this creative challenge. The result: Lots of colourful shop-windows, where not only horse figures, horseshoes, bales of straw and the CHIO Aachen mascot Karli could be found, but of course also – in true Dutch style – windmills, clogs, tulips and even a “real” Frau Antje. It was thus no easy task to choose the best shop-window. The winners in the two categories were announced during a champagne reception in the Drivers’ Club during Soers Sunday. “Brille am Jahnplatz” convinced the jury and took first prize, in the public voting the winner was “Glance Hairstyling”.

The prizes were awarded by Stefanie Peters, ALRV Supervisory Board Member; the Lord Mayor Marcel Philipp; Manfred Piana, Executive Director of the City Market & Campaign Committee e.V.; Bernd Mathieu, Chief Editor of the Zeitungsverlag Aachen, as well as Alexandra Behle, Publishing Director at Super Sonntag. And of course the popular CHIO Aachen mascot, Karli, was also there to congratulate the elated winners, supported this year by Carlo Klever, the mascot of the Zeitungsverlag Aachen. To commemorate the anniversary, the City Market & Campaign Committee raffled off a voucher for the Ratskeller, which went to Martello Immobilienmanagement GmbH & Co. KG. 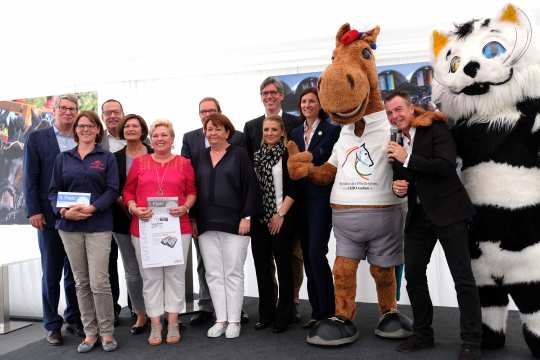