Shane Sweetnam had a plan in the Prize of Sparkasse…

…and it was to win. Shane Sweetnam is Irish after all. And – according to him - the Irish love hunting competitions over ditches and banks like the Prize of the Sparkasse.

His plan came off. Shane Sweetnam was pretty confident today. The reason for his optimism has four legs and is called Cyklon: “He is 17 years old and has already won plenty of classes. He also came second in the Derby in Falsterbo. He has experience over natural fences and can be really fast.” That was evident today: The stallion and his rider galloped to victory in a time of 64.89 seconds.

Second place went to the British rider, Harry Charles, the 19-year-old recently crowned European Champion of the Young Riders and a member of the European Young Riders Academy sponsored by Rolex. He rode the KWPN stallion, Controe by Wender R and reached the finish line in 65.29 seconds. Hans-Dieter Dreher was delighted to take third place with the Selle Français gelding, Tiopepe des Champs for whom the clock stopped at 67.09 seconds. 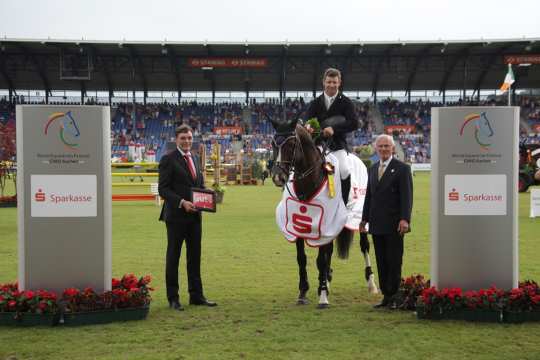