A for Ahlmann, A for Allianz-Preis – Christian Ahlmann already finished first in the 1.55-metre jumping competition with a winning round in 2017 with Caribis Z. Precisely one year later he repeated this victory.


It took Christian Ahlmann and the just eleven-year-old Caribis Z 47.75 seconds to cross the finish line in the winning round. The clock stopped at 48.04 seconds for Hans-Dieter Dreher and Berlinda. Luciana Diniz (POR) and Camargo came third in a time of 50.34 seconds.

Christian Ahlmann hadn’t set himself a goal for today’s class, but he said: “It was like the Grand Prix for Caribis Z today.” The Zangersheide-bred stallion couldn’t compete due to injury for a long while. Aachen is only his fourth show this year. “So, I was surprised that he jumped so well,” commented Ahlmann. He admitted however: “Caribis feels very much at home in this arena. There are horses that have 20 to 30 percent more scope here in Aachen, whereas it overwhelms others.” The team bronze medallist from the Olympic Games in Rio de Janeiro described how it feels as follows: “When one rides into the stadium, all of the horses eyes widen and don’t know in what direction they should go. This is the case over the whole course for some horses. Others switch over as soon as they head for a fence. Horses like Cöster and Codex (his former top horses, note by the editor) felt at home in this ring from the word go. It is not something one can teach them. It is either the case or not.” As such, the chances are quite high that Caribis Z will follow in the footsteps of Ahlmann’s former successful horses. He is confident himself and also cited the names Tokyo and Clintrexo in this context, who he is also competing with here. He will be starting in the Rolex Grand Prix tomorrow with one of the latter. Ahlmann hasn’t set his hopes too high yet. “But they are on the right track and I hope they will have gained enough experience to take the victory next year!” 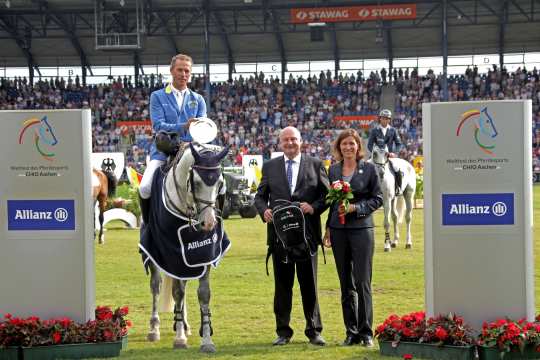