Second victory for Meyer in the Sparkassen-Youngsters-Cup

The name of Tobias Meyers’ seven-year-old Zangersheide-bred mare Celebrity – H says it all. The pair namely rode to victory in the second class of the Sparkassen-Youngsters-Cup at the CHIO Aachen 2022 today.

Celebrity – H, what an appropriate name! In spite of being just seven years old, the Comme il faut daughter seems to have proved that she is a natural winner, here in Aachen too. First of all on Tuesday, when she won the first competition of the Sparkassen-Youngsters-Cup which comprises of three classes. And once again today, when she left her fellow competitors trailing behind her in the second round after crossing the finish line in 60.17 seconds. Two eight-year-olds followed in second and third place: the OS stallion, Medarco PS by Messenger ridden by Philip Rüping (0/61.67) and the Zangersheide-bred stallion Vellington de Carat Z by Vivaldi du Seigneur under Jérôme Guery from Belgium (0/61.81).

Asked about his Celebrity – H, Tobias Meyer raved, “I got her as a five-year-old. She was very complicated at the time. She is always very electric and very hot, very hectic and carries her head very high. I am always glad when she is just walking,” he grinned. But on the other hand she has very good qualities: “She very rarely makes a mistake. And to beat her against the clock, one really has one’s work cut out!” As we noticed today, in spite of all the efforts of his fellow competitors, they had no chance. 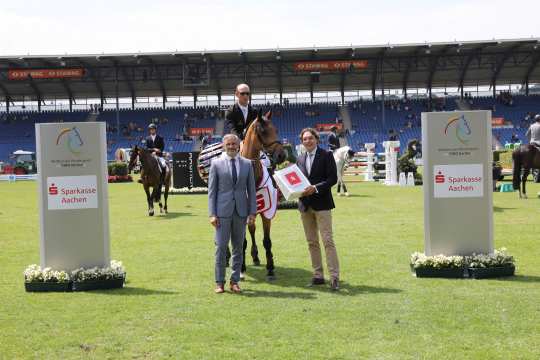