The Irish rider Darragh Kenny and the twelve-year-old Selle Français stallion, Volnay du Boisdeville, obviously make a perfect team as they demonstrated on their first joint performance in the Prize of StädteRegion Aachen.

Darragh Kenny couldn’t praise Volnay du Boisdeville, who is incredibly swift for his calibre, enough when they went into the lead shortly before the end of the 1.50 metre jumping competition in two phases, in the Prize of StädteRegion Aachen in memorial of District Administrator, Hermann-Josef Pütz. Up until then, the French rider, Marc Dilasser, was in first place with the also French-bred Chamann Has, after the pair had taken 32.35 seconds to cross the finish line. However, Kenny and Volnay du Boisdeville were even 0.78 seconds faster. Third place went to the US American rider, Lillie Keenan, with the Zangersheide stallion, Agana van het Gerendal Z (by Aganix du Seigneur). They galloped through the light barrier in a time of 32.86 seconds.

Volnay du Boisdeville actually belongs to one of Darragh Kenny’s pupils, Teddy Vlock. The stallion has already competed in Nations Cups and achieved placings in four-star Grand Prix with the rider from Israel. So, the Mylord Carthago son already has plenty of experience. But not with Darragh Kenny as yet. The latter explained that he hadn’t actually intended to win: “In the first phase, I just tried to get to know him. He felt really good so I thought, okay, then I’ll try riding fast.” It worked. Kenny’s bottom line: “It is fantastic winning here, I love it!” 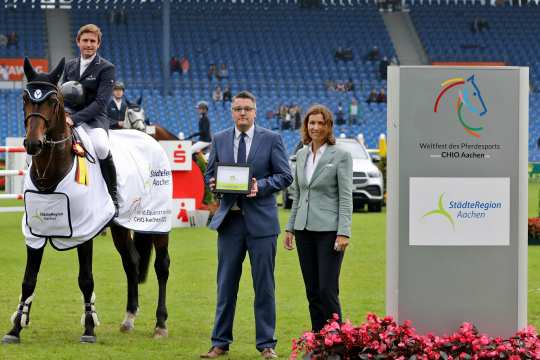