It was a close competition in the third Major of the year: After his victory at the Spruce Meadows “Masters”, the Egyptian rider, Sameh El Dahan’s personal Rolex Grand Slam of Show Jumping has begun.

What a final! Two riders had qualified for the jump-off in the “CP International presented by Rolex” at the Spruce Meadows “Masters”. Who would be the next candidate to claim a Masters victory in the legendary “Rolex Grand Slam of Show Jumping”? Maikel van der Vleuten from the Netherlands or Egypt’s Sameh El Dahan? The clock stopped on 42.98 seconds after van der Vleuten’s speedy round. Will El Dahan succeed in beating his time? Yes, he did! He crossed the finish line on a time of 42.21 seconds – and thus for the Egyptian rider, his personal Rolex Grand Slam of Show Jumping has now begun.

The Rolex Grand Slam unites the four Majors `s-Hertogenbosch (NL), Aachen (GER), Calgary (CAN) and Genf (SUI). The system is simple: Anyone, who wins three shows in a row, receives 1 million Euros on top of the prize-money of each show. If that same rider then continues their success by winning a fourth Major in succession, they will be rewarded with an additional 1 million Euro bonus. Moreover, anyone who wins two out of the four shows, also receives a bonus.  If two shows are won in succession, the bonus is 500,000 Euros. If the rider is successful in qualifying for the “Two out of four mode”, but doesn’t claim the victories at two consecutive shows, the bonus total 250,000 Euros.  It is only the rider that counts. It is possible to claim the bonus riding different horses. This system is infinite, it is not limited to a calendar year. It is a never ending story. 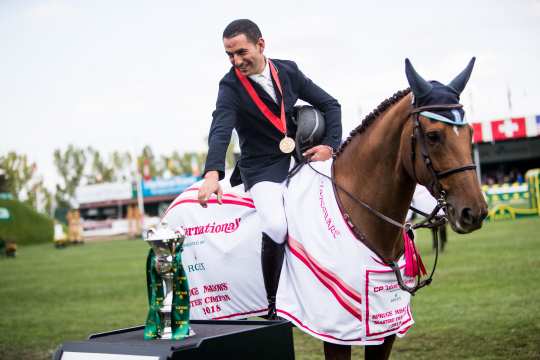