The first competition of the Aachen International Jumping has been decided and goes to Richard Vogel with "Lesson Peak". They took the victory with a clear round in 28.94 seconds, narrowly beating Michael Jung (29.06 seconds) and Pieter Devos (29.63 seconds).

“I am very happy. My horse put in a super performance,” summed up Richard Vogel (GER) after his ride in the two-phase jumping competition. “I didn’t ride that brilliantly, but the horse compensated for me.” He not only praised the 14-year-old gelding, but also the course designed by Frank Rothenberger. “It was a very pleasant class, the course wasn’t too demanding, which meant I was able to ride at a normal speed during the first phase and then put my foot down a bit in the second phase.”

Vogel had to bite his nails when Michael Jung (GER) and “fischerDaily Impressed” were in the ring, because the pair almost cracked his best time. The clock namely stopped at 29.06 seconds after the second phase. The World and European Eventing Champion, who also picked up the gold medal at the Olympic Games, repeatedly keeps changing disciplines and competing instead in international jumping competitions – successfully, as one can see. The number five in the world ranking list, Pieter Devos (BEL), came third with “Haloubet Hitchcock – BWP” in a time of 29.63 seconds.

Winning in Aachen is a familiar experience for Richard Vogel and “Lesson Peak. The pair rode to victory in the Finals of the U25 Jumping Trophy at the CHIO Aachen in 2018 and 2019. “It is a completely different atmosphere, of course one can’t compare it with a full house in the Main Stadium,” explained Vogel. “Aachen still has its special charm though and riding here in the Deutsche Bank Stadium is something very special.” 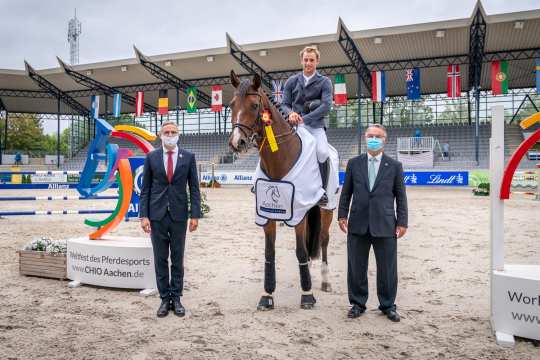