In advance already one had promised that this year’s Opening Ceremony at the CHIO Aachen, the World Equestrian Festival, would overshadow everything that had come before. And they certainly hadn’t promised too much either.

Every year a partner county back up the CHIO. In 2016 it is Sweden. And the country of the Dalecarlian horses had sent its Queen to Aachen. Accompanied by her husband, His Majesty Carl Gustaf, and her Royal Mounted Guards and the Royal Fire Brigade, Her Majesty, Queen Silvia of Sweden, was driven into the Soers in a carriage amid the thunderous applause of the crowd and took her place in the VIP box, where she was awaited by among others Princess Benedikte of Denmark. Whereby first she actually walked over to the podium to welcome the Aachen crowd and officially open the CHIO 2016. She had already reckoned on the fact that her speech would be interrupted again and again by the applause in the sold-out stadium: “I have already heard that the crowd here in Aachen is very special.”

This special audience hat plenty of opportunity this evening to applaud loudly. In just under two hours Sweden’s history was enacted from the Middle Ages through to the Eurovision Song Contest winner of 2015 here at the Soers. Knights met up for a jousting competition (“Let the competition begin, let the best knight win!”). The Middle Ages made room for a herd of wild Vikings, who finally celebrated a quadrille to pop music by Avicii with their draught horses (which as we all know originally come from Sweden) in front of the VIP box.

And of course it wouldn’t be a Swedish festival with midsummer. Exactly. Not a Swedish festival. So the organisers from Aachen had invited between 400 and 500 “Midsummer night guests” to the Soers, who clad in traditional costumes danced around the Midsummer poles to the sounds of Swedish music. The cheerful activities were briefly interrupted when Emil from Lönneberga and his sister Ida drove into the ring in a pony carriage to hoist the national flag. Then all of a sudden something else was flying on the mast instead of the Swedish banner. Typical Emil! Emil is probably still sitting in the shed carving wooden figures – his father was probably more successful in catching him than the police who chased after Pippi Longstocking and her Little Uncle in vain. Ronja the Robber’s Daughter and men of her father Mattis had also found their way from Mattis Forest to the Soers, where they also met up with Karlsson-on-the-roof, who actually managed to fly around the whole stadium behind the carriage!

When Abba rode into the arena on four Spanish grey horses to present the alta escuela to the sounds of “Waterloo” and “The Winner takes it all”, the atmosphere reached its climax and instead of Pippi Longstocking’s song, the ABBA hits of the 1970s that almost every child knows rang out from the stands.

After Queen Silvia waved to the Swedish CHIO participants who were parading past in the convoy of carriages and wished them luck, balloons were let up into the sky, which made reference to the 2017 European Championships, which are being staged in the Swedish metropolis of Gothenburg.

The performance by Måns Zelmerlöw, the winner of the Eurovision Song Contest in 2015, was the crowning finale and built the bridge to the present and it also brought the crowd to its feet.

From tomorrow onwards, the focus in Aachen will be on the sport up until Sunday. Because this year the motto is: “First CHIO, then Rio.“ For many nations, among others also Germany, the CHIO Aachen is the decisive qualifier for the Olympic Games. In other words: Whoever wants to win a ticket for South America, will have to put in a top performance in Aachen. So, one can look forward to world-class performances by both the two-legged and four-legged athletes over the coming days. 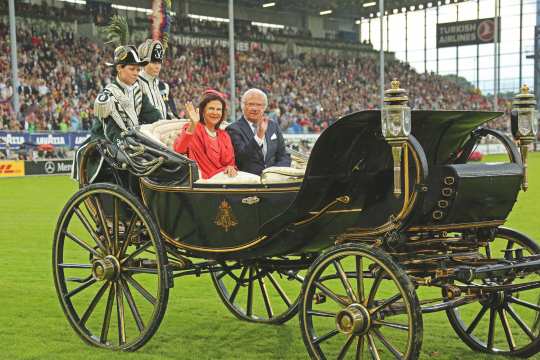 The Swedish royal couple at the CHIO Aachen opening ceremony 2016. 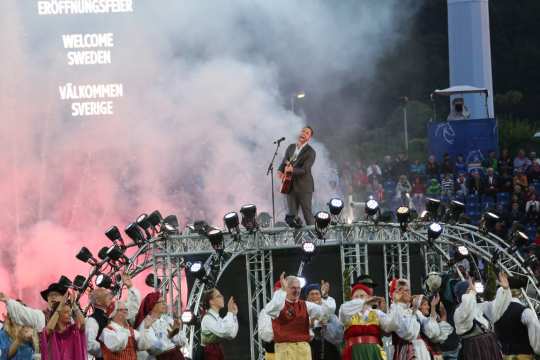