As the last to go, Philipp Schulze Topphoff snapped the victory away from Richard Vogel in the qualifier for Germany’s U25 Jumping Cup of the Foundation of German Top Horses, Prize of the Müter Family.

It got off to a good start! Of the 20 participants in the qualification for Germany’s U25 Jumping Cup of the Foundation of German Top Horses, Prize of the Müter Family, 13 pairs jumped clear. And all in all, the riding skills demonstrated were indeed a feast for the eyes.

As the 15th pair to start, after jumping clear in 66.92 seconds, the two-time winner of this class, Richard Vogel, set a mark with the Comme il faut son, Caramba, which everyone thought wasn’t possible to beat. But then, as the last to go, Philipp Schulze Topphoff, entered the ring with Clemens de la Lande, also a descendent of Marcus Ehning’s Comme il faut, who was recently retired from the sport. The pair actually achieved the amazing feat of knocking one second off Vogel’s time. The clock stopped at 65.74 seconds, which ensured them the victory. Vogel finished second, third place went to Hannah Schleef. She rode a horse that previously celebrated victories with among others Richard Vogel: the Hanoverian gelding, Perry KHR, who is always well-known for fast rounds. Today, he reached the finish line in 68.31 seconds.

The aim behind Germany’s U25 Jumping Cup is to make the transition into international top sport easier for aspiring young riders. In the course of four qualifications in Hagen, Mannheim, Warendorf and Balve, 20 young talents qualified for the Final staged here at the CHIO Aachen. One gained the impression that the quality of the rides improves from year to year. The national coach, Otto Becker, co-initiator of the concept commented: “That is precisely the goal. We don’t just want to have five top riders in the squad, we want to introduce new people too. Aachen is a great motivation for them!” 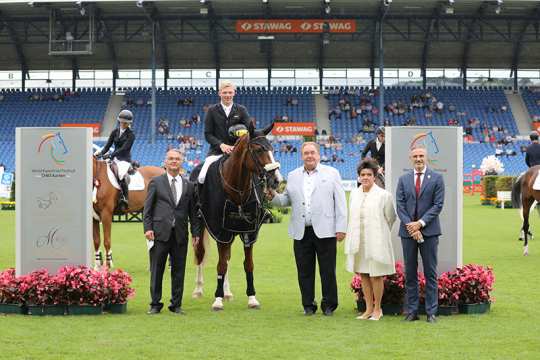