Prize of the VUV – Vereinigte Unternehmerverbände

goes to Dorothee Schneider “with a palpitating heart”

The “still green” First Romance carried team Olympic gold medallist, Dorothee Schneider, to the victory in the Prix St. Georges, the Prize of the VUV – Vereinigte Unternehmerverbände. What the gelding lacks in experience, he certainly makes up for with his talent.

It is the first time that the eight-year-old Fürst Romancier son, First Romance, is competing at the CHIO Aachen. His rider noticed that: “He found everything extremely exciting! Five minutes before entering the arena he spooked on the warm-up area and I could feel his heart palpitating through my riding boots.” But the gelding calmed down again and completed the test like an old hand – although it is his first season competing at this level and Aachen is only his second international show ever. “But he has what it takes to belong here,” is how team Olympic gold medallist, Dorothee Schneider, describes her feeling riding the youngster. The two won the Prix St. Georges, Prize of the VUV – Vereinigte Unternehmerverbände – with a score of 74.824 percent. Schneider said: “He is simply a joy to ride! He impresses me again and again!” Obviously not only her, but the judges too!

Second place on a score of 73.941 percent went to a pair that already represented Germany at the World Equestrian Games of the Young Dressage Horses: Stefanie Wolf and the nine-year-old Rhineland-bred mare, Saphira Royal by San Amour.

The horse that came third also has World Championship experience, the nine-year-old KWPN stallion, Eye Catcher by Vivaldi. He won the bronze medal at the World Championships of the Young Horses as a five and six-year-old, at the time under the Dutch dressage rider, Kirsten Brouwer. In the meantime, he has a Spanish rider, namely Antonio Laiz Zandio, the pair were awarded a score of 71.441 percent for their debut performance in Aachen. 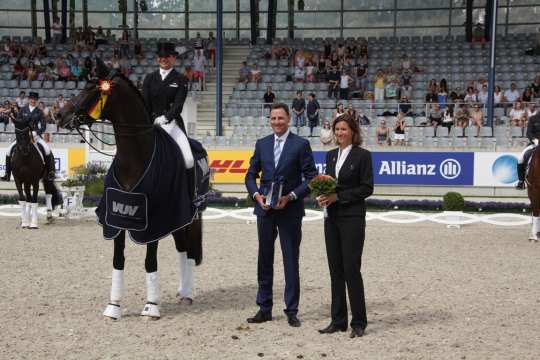