Anne Meulendijks travelled to Aachen from the CHIO partner country in 2017 as the Dutch Champion and with high expectations for the U25 dressage tour, the Prize of the Liselott and Klaus Rheinberger Foundation. Her high expectations were totally justified.

She participated in three competitions and won all three as well as claiming the title in the premiere of the U25 Dressage Nations’ Cup. More was certainly not possible for the 23-year-old Anne Meulendijks, on her first appearance at the Soers. Riding her 12-year-old United son, MDH Avanti, she put in a superior performance in the freestyle today, the Final of the U25 Tour, claiming a score of 78.20 percent.

Meulendijks and Avanti have already been a successful team for years. In 2013, they claimed team gold and fourth place in the individual classification at the European Championships of the Young Riders in Compiègne. In 2014, she picked up team silver and gold in the individual classification. The following year she moved into the U25 age group and has been rushing from victory to victory ever since. Today, she celebrated her eleventh victory in succession over the past months.

Second place in Aachen went to the just 19-year-old Juan Matute Guimon with Don Diego Ymas. The Spanish rider who is a very sensitive rider caught the public’s attention overnight in 2015 when he won the Freestyle at the European Championships of the Juniors in Vidauban. So the freestyle is obviously his strength. Today, the judges rewarded his performance with a score of 75.90 percent.

An eternal rival of the winner and her team colleague, Maxime van der Vlist, came third with Bailey. The pair came second in both of the previous competitions of the U25 Tour at the Soers (75.150). Today, however they were beaten by the Spanish rider.

The German trio ranked fifth, sixth and eleventh. Bianca Nowag was delighted at coming fifth with her former U21 European Champion in the Freestyle, the Fidermark daughter, Fair Play BB (72.225), followed by Juliette Piotrowski with Sir Diamond (70.975), and Lisa-Maria Klössinger and FBW Daktari (11th, 70.425). 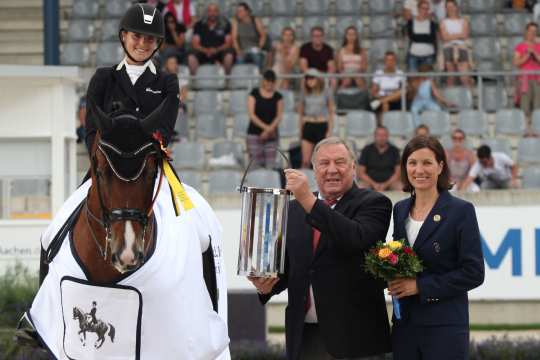