New horse, new luck for Philipp Weishaupt in the Prize of StädteRegion Aachen

Philipp Weishaupt has only been riding the nine-year-old Coby for six weeks. Today, in the Prize of StädteRegion Aachen in memory of Landrat Hermann-Josef Pütz, the gelding once again showed his rider that he destined for greater tasks.

This is to be taken quite literally. Since Philipp Weishaupt had namely thought, Coby would be a great horse for speed competitions. “But now I keep getting the feeling that he could also jump in the top classes!” The nine-year-old Hanoverian-bred gelding already won two classes at his first competitions in Calgary. And now the first appearance at the Soers and a victory straight away in the 1.5-metre-high two-phase jumping competition, the Prize of StädteRegion Aadchen in memory of Landrat Hermann-Josef Pütz. Weishaupt: “I am sure we are going to have a lot of fun with him!”

With a clear round in 32.50 seconds, Philipp Weishaupt and his Contagio son, relegated Luciana Diniz (POR) and the new star in her yard, the Selle Français gelding, Vertigo du Desert by Mylord Carthago, into second place (33.44). This is a pretty new horse/rider combination too. Diniz has been riding the grey gelding since March. An acquaintance rang her and had seen “the next Fit For Fun” for her. Fit For Fun is the horse with which Diniz came second with in the Grand Prix of Aachen, in both 2017 and 2018. So, it is no surprise that Diniz was buzzing. It turns out that her acquaintance certainly hadn’t promised too much: “It was love at first sight,” said the rider, who originates from Brazil and whose stables are located near Bonn. The pair have already won several rosettes and put in a promising opening performance at the World Equestrian Festival today.

The Swiss rider, Martin Fuchs was delighted at finishing third with the Zangersheide-bred mare, Chica BZ (34.54), followed by Felix Haßmann on Balance (35.47) and Daniel Deußer with Killer Queen VDM, who won the Sparkassen-Youngsters-Cup last year. 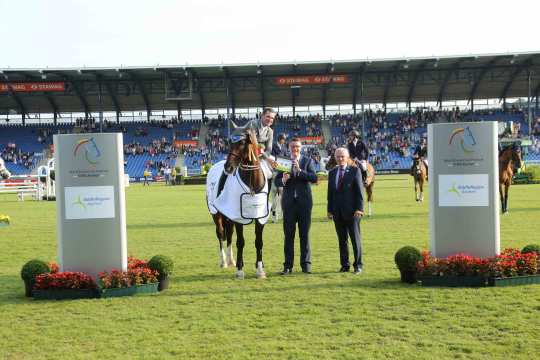 Congratulations to the winner from Tim Grüttemeier and ALRV President Carl Meulenbergh (right).