Prize of North Rhine-Westphalia goes to the USA

In 2017 the US American rider, McLain Ward, discovered Clinta at the CHIO Aachen under Philip Rüping. He spent seven months negotiating with the previous owner, Paul Schockemöhle. Now he is riding the super mare here himself and together the pair secured the victory in the Prize of North Rhine-Westphalia.

The Prize of North Rhine-Westphalia is a jumping competition with two rounds. The best 25 pairs from round one qualify for round two against the clock, but have to take any possible faults from the first round with them. McLain Ward’s Oldenburg-bred mare Clinta had no faults when she entered the stadium at the Soers the second time round (as is the case for every Grand Prix that McLain Ward has ridden with her since early this spring). And she certainly made no mistakes against the clock, what’s more she was as quick as lightening: 46.95 seconds. That was no surprise for McLain Ward: “She jumps spectacularly. And so carefully that at first we weren’t even sure whether she would actually ever jump at top level. But she has proven that she is capable of everything!”

The eleven-year-old grey mare left the experienced 17-year-old Reveur de Hurtebise and Kevin Staut trailing behind. The two Olympic team gold medallists from Rio in 2016 crossed the finish line in 48.16 seconds, the second best time. Kevin Staut took the opportunity here in Aachen to put something straight: It is not true that Reveur de Hurtebise isn’t going to compete again after his rather unfortunate performance at the World Cup Finals in Paris. “Perhaps we worded it a little misleadingly. He is not going to compete at any more Championships which puts him under too much pressure.” That is why Staut is not placing his bets on the speedy chestnut for the Rolex Grand Prix on Sunday, but instead on his Nations Cup horse, Silver Deux de Virton – added at the same time however: “I would have a better chance with Reveur though.”

The Irish show-jumper Cameron Hanley finished third with the ten-year-old Tinka’s Boy daughter, Eis Isaura, after jumping clear in a time of 48.49 seconds. She too will be staying in her stable during the Rolex Grand Prix. Her rider stressed however that he definitely considers her to be a Grand Prix horse for the future.

Maurice Tebbel and the nine-year-old Rhineland-bred stallion, Don Diarado by Diarado, also made a fantastic impression in the jumping competition. Family Müter bought the horse especially for the repeated winner of the Mercedes-Benz Nations Cup. It was a good decision, as today’s fourth place in the Prize of North Rhine-Westphalia underlined again (0/49.29). Last year the two of them won the U25 Jumping Trophy. 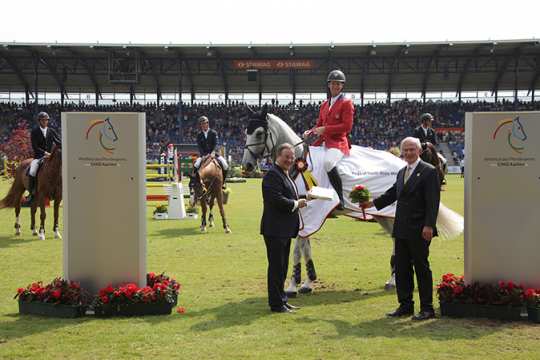