Australia’s Boyd Exell drives from victory to victory. After already winning the opening competition for the four-in-hand drivers yesterday, he continued his triumphal march today in the Prize of Martello Immobilienmanagement GmbH & Co. KG.

It wasn’t a new world record like the one the World Champion set yesterday, but he did have a clear lead over his fellow drivers: The Australian driver, Boyd Exell, who lives in Valkenswaard, the Netherlands drove out of the arena today on a score of 31.86 minus points. Second place went to the driver from the USA, Chester Weber (38.52 minus points), followed by the Dutch father and son duo, Ijsbrand Chardon (41.98) and his son Bram (42.05).

The ladies flew the flag for Germany. Like yesterday, Mareike Harm was the best German driver finishing eighth on a score of 47.71 minus points. The individual driver, Anna Sandmann, followed directly behind her in ninth place (48.51). Whereby she had a moment of shock after the final salute when one of the leaders in his team got the reins tangled over his head. Luckily, they untangled themselves. If one of the grooms had had to dismount to help him, they would have been penalised.

Things didn’t run very smoothly for the other German drivers. The German Champion, Michael Brauchle is lying in 15th place before the Marathon (54.97), Christoph Sandmann, Anna’s father currently ranks 17th. (55.44) and Georg von Stein 20th (57.44) among the field of 25 participants.
Michael Brauchle, Mareike Harm and Georg von Stein are driving for the German team in the DHL Nations Cup. Prior to the Marathon on Saturday, the German team is currently lying in fourth place with an overall score of 102.680 minus points, behind the Dutch team who have a clear lead (84.030), the USA (85.30) and France (95.690).

The prize-giving ceremony was the fitting occasion to thank the sponsor of the competition, the Martello Immobilienmanagement GmbH & Co. KG for their 25-year partnership with the CHIO Aachen. Baron Buchholtz presented the Managing Director, Mr. Wolfgang ‘Tim’ Hammer, a bronze sculpture bearing the inscription: “Mr. Hammer, as a company from Aachen, the Martello Immobilienmanagement GmbH & Co. KG has deep roots in the region. Like the CHIO organisers, the ALRV with its long history, both also have a passion for the equestrian sport in common. The result has been a fantastic and trusting partnership over the past 25 years. “Driving” is a matter close to your heart, as your commitment at the World Equestrian Festival demonstrates. We would like to take this opportunity to sincerely thank you for this support. I am delighted that you are our guests today and would like to present you with this bronze sculpture as a sign of our appreciation.” 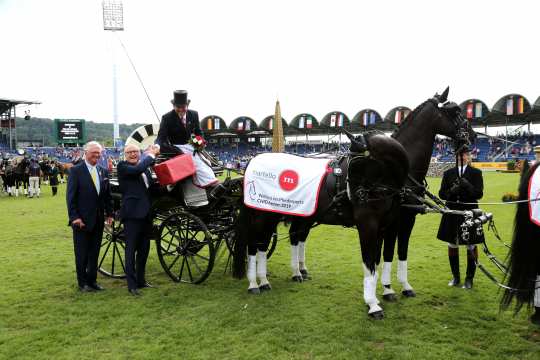