Wilm Vermeir from Belgium had often attended the CHIO Aachen as a spectator in the past, but it is the first time he is actually taking part this year. And at the first attempt succeed in claiming victory today in the Prize of Handwerk.

A 1.45-metre  course against the clock is the challenge for the show-jumpers and their horses in the Prize of Handwerk. Some of the riders use the class as a warm-up for the Big Tour. This also applies for the Belgian rider, Wilm Vermeir, who had saddled his eleven-year-old BWP-bred mare, Linguini de la Pomme. He explained that she is a “speed horse”. The Marius Claudius daughter did this description true justice today with a clear round in the time of 62.61 seconds. Brazil’s Yuri Mansur and his Selle Francais stallion Away Semilly (by Diamant de Semilly), didn’t have a chance to top that. Mansur finished second with a time of 63.04 seconds, ahead of Philip Rüping riding the nine-year-old Messenger daughter, Miss Chacco PS (67.30) and his stable and training colleague at Paul Schockemöhles, Patrick Stühlmeyer with the OS-bred gelding Accoton PS (by Pikachu de Muze). The latter took just five hundredths of a second longer than Rüping to finish the course.

The 42-year-old winner has schooled most of the horses he rides at international level today himself. He will also compete with his top horse, IQ van het Steentje, here in Aachen, with whom he recently claimed second place in the Grand Prix at the Nations Cup show in St. Gallen. Nevertheless, after his first performances at the Soers, he commented, “The impressions are incredible, the show is incredible and the crowd is even more incredible. I have never seen so many people!” And he’s certainly going to have the chance to enjoy that in full over the next few days. 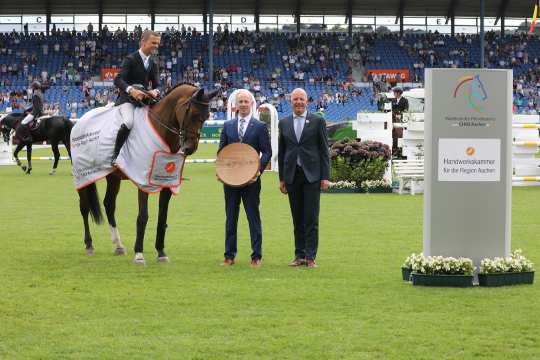