Four days before the CHIO Aachen 2108 kicks off, the organisers had plenty of innovations to announce. Exciting days lie ahead for the athletes and the visitors regarding both the sporting events and the digital development of the show.

The press conference on the CHIO Aachen 2018 began with a moment of reflection. Carl Meulenbergh, President of the Aachen-Laurensberger Rennverein e.V. (ALRV) paid tribute to Hans Günter Winkler, who has passed away. “The stadium in Aachen was his living-room, we will sincerely miss this great sportsman,” commented Meulenbergh. This also particularly applies to Aachen’s spectators, because “in spite of its immense internationality, the CHIO Aachen is deeply rooted in the region,” continued the President of the ALRV. “The CHIO determines the calendar over these days,” said Aachen’s Lord Mayor, Marcel Philipp, with a grin, delighted about the charismatic power of the show: “This is outstanding, but also it economic power is impressive. But above all the CHIO is a folk festival, we all meet up here.”

Two of the most aspiring German equestrian sport athletes proved to be extremely confident. The show-jumper, Laura Klaphake (24), and dressage rider Sönke Rothenberger (23), are both hoping to achieve a true innovation: Whilst Sönke could perhaps triumph over Isabell Werth, who is actually considered to be more or less unbeatable in Aachen, Laura Klaphake is hoping to be nominated for the team and take the third victory in succession with the team in the Mercedes-Benz Nations Cup. “Why not?” she asked. 2018 has gone brilliantly so far “and I am optimistic that this will continue to be the case at Aachen, my absolute favourite show. In the more recent past, the question in the dressage has rather been, who is going to come second behind Isabell Werth. Indeed, incredibly she currently ranks 1st, 3rd and 7th in the world ranking list with different horses. However, in May, Sönke Rothenberger was already able to beat the “FC Bayern of the dressage riders” at the German Championships – so why not in Aachen too? “Cosmo is probably the best horse in the world,” commented Sönke Rothenberger, “we intend to prove this at the CHIO.”

Nevertheless, there is huge competition, Sönke Rothenberger is not the only rider, who will be challenging Isabell Werth. “The best of the best travel to Aachen,” the Show Director, Frank Kemperman, reported. For example, the US American Laura Graves, currently second in the world ranking list and Denmark’s top dressage rider, Catherine Dufour (4th in the world ranking) have also already confirmed their participation. The figures that Frank Kemperman presented are impressive: There will be 108 hours of sport at the CHIO Aachen 2018 (July 13th-22nd), 358 athletes from 28 nations will be battling it out for prize-money totalling 2.7 million Euros. 1009 horses will be coming to Aachen, 400 of which will participate in the shows. Alone 1,000 extras are taking part in the Opening Ceremony, 1,200 employees are responsible for the smooth running of the show.

“Innovations are what actually make tradition possible,” stated Michael Mronz, General Manager of the Aachener Reitturnier GmbH (ART). The digitalisation is part of society and thus also part of the CHIO Aachen. “In order to stay in the picture, we strive to be pioneering in this area,” explained Mronz. For instance, in cooperation with the official technology partner, SAP, successful projects such as the spectator judging for the dressage and vaulting have already been developed. The organisers are also considering together with experts from the RWTH Aachen (Aachen University), how technology can make the sport even more transparent and even more entertaining. “An important aspect here is that the projects have to be realisable and offer added value.”

Prof. Dr. Jan Borchers, Chair of Media Informatics at the RWTH Aachen, presented ideas that arose in the course of the initial discussions. “Perhaps the obstacles of the future will be made by 3D printers on-site,” the scientist revealed. “Everything will be designable, production techniques are changing, which of course also has an impact on the logistics,” added Borchers. Aided by his team, he gave an impression of modern production technology: The CHIO Aachen logo was produced using a 3D printer on-site – and presented to the journalists and guests for their desks at home.

Michael Mronz presented a further idea: In the near future, the show visitors could consider in the course of a virtual tour via augmented reality, who should give them a virtual guide of the show grounds: Ludger Beerbaum, Sönke Rothenberger or perhaps indeed the professional football player, Thomas Müller. The latter has incidentally also confirmed his attendance together with the star chef, Johann Lafer, who will be cooking for the guests in the “Lavazza meets Lafer” tent during the week of the show. 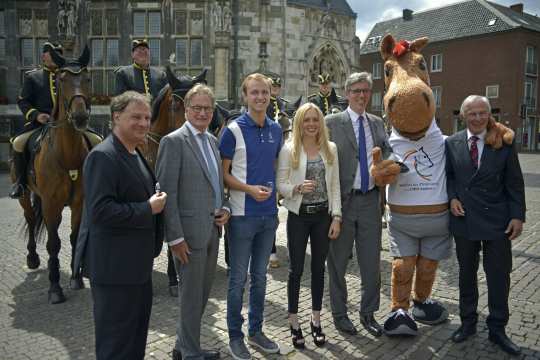