A journalist has never received an accreditation for the CHIO Aachen one year in advance before. Up until yesterday. Because there was a premiere as a farewell gesture: Michael Mronz, General Manager of Aachener Reitturnier GmbH and Frank Kemperman, Chairman of the Aachen-Laurensberger Rennverein e.V., organisers of the CHIO Aachen, presented ZDF commentator Gert Herrmann with a show pass for 2022 as a timely invitation for next year’s CHIO Aachen. For a good reason: The CHIO 2021 is Herrmann’s farewell performance as a commentator in Aachen.

Hermann came visited Aachen for the first time as a 16-year-old – as a private guest and he had slept in a tent. But he had spent most of the time at the Soers anyway, because he hadn’t wanted to miss a single event. In 1997, he made his first appearance as an equestrian reporter together with the legendary journalist, Arnim Basche. Over the past 24 years, Herrmann has commentated numerous reports and live broadcasts from Aachen, including of course also the Equestrian World Championships in 2006 and the European Championships in 2015. Due to his cheerful nature and expertise, the riders also hold him in high esteem – which is why all of the CHIO Aachen winners in 2021 were glad to sign a panorama view of the Main Stadium, which was presented to Gert Herrmann together with the show pass as a sign of gratitude and recognition for his services. There were also gifts from his colleagues in the scope of the small ceremony in the ZDF mobile editorial office, which were bestowed by the presenter, Kristin Otto. 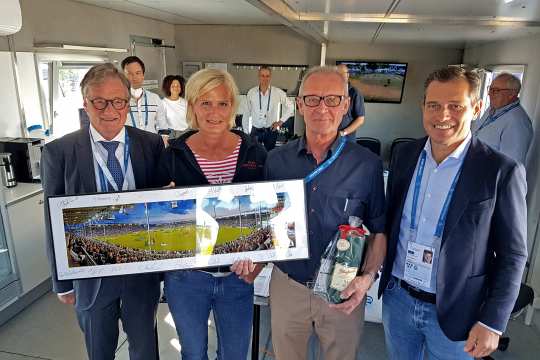