Philip Weishaupt and the CHIO Aachen

Met his girlfriend, got engaged, won the Rolex Grand Prix

What a story. Five years ago, Philipp Weishaupt met his girlfriend, Bliss Heers, at the CHIO Aachen –the native American is, like himself, also a show-jumper. Yesterday, the two of them got engaged and today he won the Rolex Grand Prix, the Grand Prix of Aachen.
And how he won! Two time faults after the first round, the entire world elite to follow. How high had he rated his chances of winning at that point in time? “Absolutely zero” he explained and has to laugh as he recalls the moment. Then, instead of preparing himself professionally for the second round, he chose to wonder round the CHIO Aachen Village with his Bliss. And went on to jump clear in the second round and experience how unluckily the second round ended for Martin Fuchs (SUI) and Gerco Schröder (NL) – all of a sudden his name is on the Winners’ Board of the World Equestrian Festival, CHIO Aachen: 2016 Ph. Weishaupt. Weishaupt finds this “incredible” and “awesome”.
After the victory in this first Major of the year, Weishaupt’s personal Rolex Grand Slam of Show Jumping has begun, a victory at the next Major – at Spruce Meadows in Canada in September – would mean his this success story would continue. And there is also a special story behind this too, because this fantastic showground at the gates of Calgary is precisely where Weishaupt prepared himself for the Aachen Rolex Grand Prix.

Amid the backdrop of a full-house, the professional rider, who is employed at the Beerbaum Stables and the just nine-year-old Holstein-bred stallion, LB Convall, rode to victory in the Grand Prix of Aachen, the Rolex Grand Prix at the World Equestrian Festival. Albeit after a competition that the course designer, Frank Rothenberger, described to be the “most curious” in his career. The Federal Defence Minister, Ursula von der Leyen, who is known to be a huge equestrian fan and regular guest at the CHIO Aachen (“It is always something special!”), summarised the atmosphere at the Soers: “I was fascinated that 40,000 people can be so quiet, when things get exciting!”

Weishaupt and LB Convall were clearly the best pair in this class. They reached the finish line double clear with just two time penalties. Predominantly, what Weishaupt saw from the tent city and afterwards from the stands was that his fellow competitors were picking up faults. Weishaupt’s colleague at the Beerbaum Stables, Henrik von Eckermann, had already prophesied in advance that the course was extremely tricky. von Eckermann particularly thought that the time was going to be the problem. How right he turned out to be! Those riders, who jumped clear, all had time faults. Besides Weishaupt, these were Gerco Schröder (NED) with Cognac Champblanc and Martin Fuchs (SUI) with Clooney. 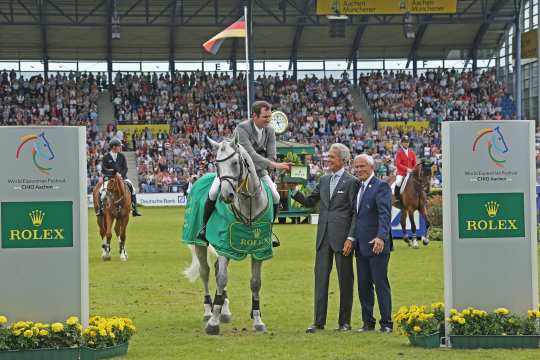