Philip Rüping unbeatable in the Prize of Handwerk

Philip Rüping, professional rider at the yard of Paul Schockemöhle, is the first German show-jumper to win a jumping class at the CHIO 2017. He excelled in the Prize of Handwerk after reaching the finish line clear in 60.10 seconds.

Philip Rüping and his ten-year-old Mecklenburg-bred mare, Chalypsa by Chacco-Blue knocked more than a whole second off the time of his fellow-competitors. This was the crowning glory after already having obtained a series of good placings over the past weeks. Namely, in the last five jumping competitions they have come under the top ten each time. And then today the highlight, the victory in the Prize of Handwerk at the CHIO Aachen.

Second place went to the Dutch rider, who currently seems to be blessed by success in almost everything, Harrie Smolders. With the emphasis on ‘almost’ everything, as we saw today. His 13-year-old KWPN gelding, Zenius by Nabab de Reve, crossed the finish line after a faultless round in a time of 61.56 seconds. Mario Stevens came third with the 11-year-old Hanoverian-bred mare, El Bandiata B by El Bundy. (0/61.69 seconds). 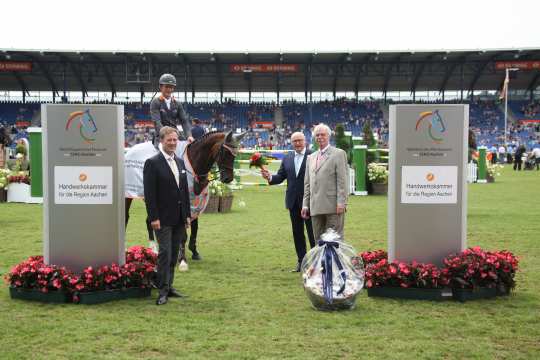