A magical evening at the Soers

“At last” – that was the word, the presenter Volker Raulf used to greet the crowd in the Deutsche Bank Stadium. “At last, we are allowed to experience live moments together again.” The ecstatic applause underlined how much the crowd shared this euphoria. Horses at the Aachen Soers again at last, live music again at last. “Horse & Symphony” at last”. And this evening had everything that has made the event so unique since its premiere in the year 2003: Equestrian sport, sometimes in elegant and noble form, sometimes powerful and dynamic, on top of that impressive music, played live by the Aachen Symphony Orchestra under the direction of Christopher Ward. An unforgettable, an incomparable, a wonderful evening. At the end of which the crowd rewarded both the show participants and the musicians with thunderous applause.

The show performances focused on Japan and the German state studs. From Celle to Warendorf through to Marbach – each is unique in its own way and yet they still all have one thing in common: They preserve the cultural asset, the horse, in its full spectrum. Which ranges from the “Hungarian Post” to various quadrilles and carriages through to the “Silver Herd”. The performances were accompanied by renditions of some of the most popular classic compositions: From Shostakovich’s “Waltz No. 2” to Edvard Grieg’s “Peer Gynt Suite”, extracts from “The Nutcracker Suite” and “The Bat Quadrille”, Strauss melodies through to the modern, but equally impressive “Palladio” by Karl Jenkins.

One of the highlights was without doubt the impressive trotting carriage quadrille by the Warendorf State Stud with the most musical blacksmiths found in the Aachen region, who performed the “Fireproof” polka together with the symphony orchestra. And the vaulters also took to the arena on this wonderful evening: Janika Derks and Johannes Kay, the newly-crowned World Champions – fascinated the crowd with their skills to the music of “The Carneval of the Animals”.

As a tribute to the partner country Japan, the orchestra played among others music from the film “Memoirs of a Geisha”. This was accentuated by a wonderful freestyle routine, the international Grand Prix rider Britta Rasche-Merkt and her 11-year-old daughter Clara and their two impressive Lusitano stallions, accompanied by dancers from the Ferberberg Ballet School under the direction of Natalie Jungschläger. A magical scene which brought typical Japanese flair to the Deutsche Bank Stadium thanks to the traditional kimonos and red flags. It was simply magical. 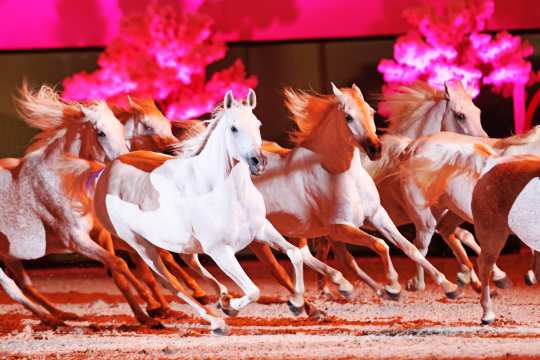 The Silver Herd from the Marbach Main and StateStud during the Horse & Symphony concert.