Paul Stecken distinguished with the Silver Horse in the Category “Personalities”

CHIO Aachen 2016: Paul Stecken distinguished with the Silver Horse in the Category “Personalities”

Paul Stecken was distinguished with the Silver Horse in the Category “Personalities” at the CHIO Aachen. He really deserved this award. Just recently he celebrated his 100th birthday. Wow. He is a living legend in the field of equestrian sport and training. He has done so much for the equestrian sport. As a riding instructor and professional trainer, who ran the Westphalia Riding & Driving School in Münster for 35 years, but above all particularly as a trainer and one can also say “conscience” of the equestrian sport.

When my father, who taught me all the tools of the trade, died in 1999, Paul Stecken was immediately there to support me. As my mentor, my adviser in all expert questions, but also as a person. From this point onwards, Paul Stecken made sure that everything I had learnt stayed on course. Nobody else could have done it better, because he is a clever adviser. What impresses me: For him the well-being of the horse and rider are more important than success. I always asked his advice when taking important decisions. And he was usually right. It gives me incredible confidence to have such a personality at my side.

What distinguishes him? What makes him such a special person? This is how I would describe it: He is a gentleman. He is attentive, is a good listener, he analyses everything very accurately, he is circumspect. His special gift: He can explain correlations extremely well. At the same time he has clear principles, which he sticks to and nothing in the world can persuade him otherwise. Nobody else has such a longer or richer wealth of experience than Mr. Stecken.

I admire and respect Paul Stecken very much and I really like him. He is honest, clever and as solid as a rock. And he has bestowed the simplest of all truths upon us: Riding correctly suffices.

Note: Eventing Olympic gold medallist Ingrid Klimke accepted the “Silver Horse” Prize in the Category “Personalities” at the CHIO Aachen on behalf of Paul Stecken. Paul Stecken is in good health, but the hustle and bustle at the World Equestrian Festival would have been too much for him. 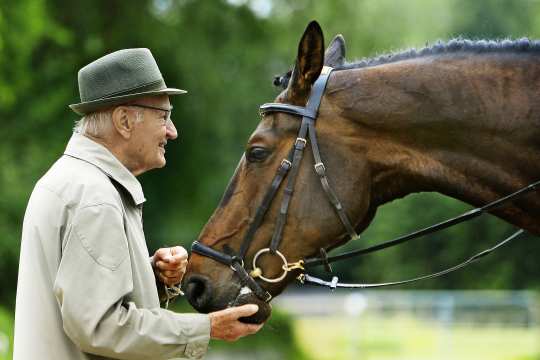