Traditionally, the first CHIO Aachen weekend belongs to the vaulters, the acrobats among the equestrian athletes. The first day of the Sparkasse Prize demonstrated that the favourites are definitely out to win!

Janika Derks travelled to Aachen as the winner of the World Cup. She took the victory for the first time in the spring in Saumur. A good omen for her performance in the Albert-Vahle Arena is the fact that France is CHIO’s partner country this year. After the compulsory and technical tests, Janika Derks has gone into the lead in the Ladies classification.

In the compulsory test, where the vaulters have to perform specific exercises in a predefined order, the 29-year-old physiotherapist was awarded a score of 8.174 with her trusted partner, Carousso Hit, lunged by Jessica Lichtenberg. In the technical test, where the contents but not the order are pre-determined, she scored 8.191. That puts her on an interim score of 8.183.

Her toughest rival comes from her own club. Like Janika Derks, previous to beginning her career as an individual vaulter Pauline Riedl was also a member of the extremely successful vaulting group, RSV Neuss-Grimlinghausen and in the past she has already claimed European and World Championship titles. She additionally secured gold in Aachen several times with RSV Neuss-Grimlinghausen. However, in 2019 she is taking part at the World Equestrian Festival for the first time as an individual vaulter. She couldn’t have hoped for a better debut: She is currently lying in second place on a score of 8.022 with Flamant (Lunger: Jessica Lichtenberg), behind her fellow club member, Derks.

Alina Roß, who is just 18 years old, 2019 is marking her CHIO premiere. Last year she won silver at the European Championships of the Juniors. Now she is competing at the very top of the ladder in the senior classification – she is currently lying in third place with a score of 7.904 with her Championship horse, San Zero, lunged by Marion Schulze.

Brüsewitz on the way to his fourth title

It is as if Thomas Brüsewitz has a subscription for the victory in the Sparkasse Prize at the CHIO Aachen. He has been undefeated in the Men’s Individual Classification since 2016. So, he is well-acquainted with the thrilling atmosphere in the Albert-Vahle Arena – unlike his horse. The ten-year-old Eyecatcher is not only competing in Aachen for the first time, it is only his second international performance with Thomas Brüsewitz ever and his first against top, world-class competition. The pair were lunged by Alexandra Knauf. Whether the trio put in a harmonious performance? The results speak for themselves: First place in the compulsory test (8.607) and in the technical test (8.151) which means they are clearly heading the field. Once again! This time on a score of 8.379.

In the men’ competition, the two current leaders are not only training partners, but also brothers. Namely, lying second behind the defending titleholder is Viktor Brüsewitz on an interim score of 8.260 – after finishing fourth in the compulsory test (8.461) on Sky Walker lunged by Gesa Bührig and second in the technical test (8.059).

Julian Wilfling with Feliciano, lunged by Lars Hansen is currently in third place after two of three rounds in total. With a score of 8.235 they are close at Viktor Brüsewitz’s heels.

Fredenbeck getting ready for a new attack

The first final results in the Sparkasse Prize will be revealed after the freestyle tests tomorrow. This also applies for the group results, which promises to be a continuation of the duel between Fredenbeck and Team Norka. The team from Fredenbeck, which is competing with Claus, lunged by Gesa Bührig, took the CHIO by storm last year – qualifying for the first time ever and immediately taking the victory. The favourites, Team Norka from VV Köln-Dünnwald, were left out in the cold. The same happened again today in the compulsory test. After scoring 7.801, the team from Fredenbeck left the group from Cologne with their horse Calidor, lunged by Patric Looser trailing behind them. The Colognians finished on a score of 7.726. The Swedish SVEA Vaulting Team is currently lying in third place with their horse Dickens Hardsyssel lunged by Ronja Persson (7.217). 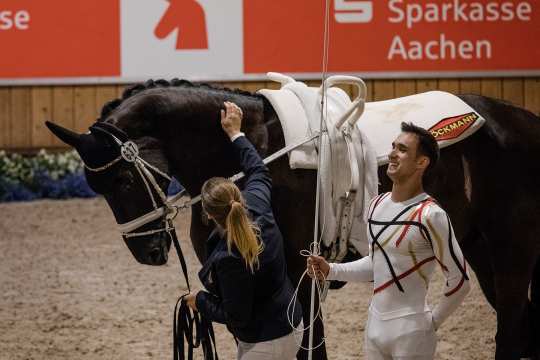