State studs meet the rising sun: The CHIO Aachen Opening Ceremony on Tuesday, September 14th, is going to be exceptional. Over 200 horses and almost 600 players promise an extravaganza in a class of its own. Everything revolves around this year’s partner country Japan, the German state studs and the excitement at finally being able to enjoy live experiences again.

“After the Corona time we are hugely looking forward to real people, real horses and real music,” said Uwe Brandt. The heart of the equestrian sport will finally start beating again, the director of the Opening Ceremony stated. And to this end, a lovely programme comprising of historic scenes and impressions from Japan, traditional horsemanship from the state studs and real, live music has been put together.

This year’s CHIO partner country Japan will be presented in all its glory. A magnificent cherry blossom installation awaits the visitors in the Main Stadium together with the Taiko Drum groups “Wagaku” and “Miyabi”. The flamboyant and pot-bellied drummers predominantly had a religious significance in Japanese history, however, the drummers have long since been impressing the crowds at big shows. The pageant will be further enhanced by dance choreographies, traditional Japanese riders like the “Yabusame” mounted archers and much more from the partner country Japan. In addition to Japan, the Opening Ceremony will be shaped by the German, state studs: “The studs will present themselves in their entire diversity, among others with sport horses, carriage teams and historical scenes,” reported Birgit Rosenberg. As Director of the CHIO Aachen Sports Department, she is also responsible for the shows at the biggest equestrian event in the world. A herd of Arabian horses is also travelling to the Soers and a quadrille comprising of 50 stallions will be a further highlight. Many of the Olympic medallists from Tokyo will also be in action, but Birgit Rosenberg didn’t what to reveal what they have in store for us at the end of the Opening Ceremony yet, the only thing she disclosed was that “it is going to be spectacular.” 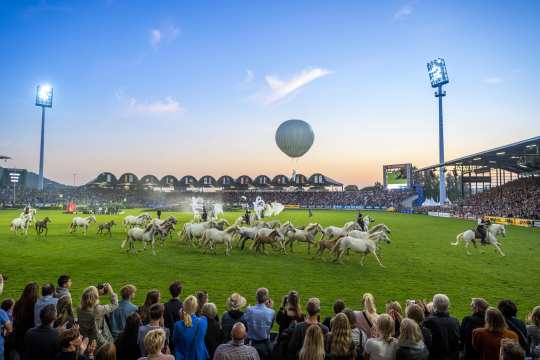