Olympic rings at the Aachen Soers? The Olympic feeling is evidently going to become reality in the year 2022 already. In coordination with the International Olympic Committee (IOC), the International Equestrian Federation (FEI) has awarded the “FEI Youth Jumping Competition” to Aachen.

“The competitions fit in excellently with our youth concept and our commitment for aspiring young athletes,” explained Frank Kemperman, the CHIO Aachen Show Director. 30 young athletes from 30 nations will travel to Aachen to compete against each other in a continental class. The competitions are being integrated into the CHIO Aachen 2022 (June 24th to July 3rd, 2022), “so that the youngsters are able to experience the legendary CHIO Aachen atmosphere in the Main Stadium,” stated Kemperman.

The competition for aspiring young show-jumpers replaces the corresponding classes of the Olympic Youth Summer Games, which were supposed to be staged in Dakar (Senegal), but which unfortunately had to be cancelled due to the Corona pandemic. After this cancellation, the FEI endeavoured to find a replacement competition. “We are delighted that the competitions are now going to be staged at the world-famous show grounds in Aachen,” commented Ingmar de Vos, the FEI President and a member of the IOC. The young athletes are between 14 and 18 years old, they will compete in one team competition and in one individual competition. The team classification is being staged as a continental competition (Africa, North and South America, Asia, Australia and Europe).

The Aachen-Laurensberger Rennverein e.V. (ALRV) has been continually expanding its commitment for youths for many years. Among other things, two of the most important shows for aspiring young athletes are organised at the CHIO Aachen grounds – the “Aachen Youngstars” in the winter on the one hand and the German Youth Championships on the other, which have also been held in Aachen several times. By integrating U25 competitions into the programme of the CHIO Aachen, the young riders have the chance of rubbing shoulders with the professional sport. In the course of the recently presented CHIO Aachen CAMPUS, the ALRV is placing an even stronger focus on the promotion of aspiring young equestrians. 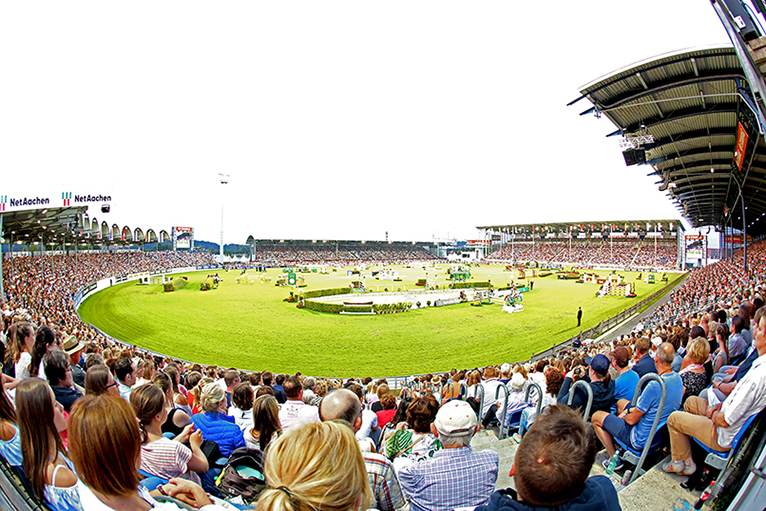 The FEI Youth Championships are going to be staged in the Main Stadium of the CHIO Aachen. Photo: Michael Strauch