This year’s CHIO partner country, France, was given a wonderful reception on the Aachen marketplace, indeed it was a festival of German/French friendship.

The CHIO Aachen mascot Karli and Trop Top, the mascot of the FFE already revealed that much before the official starting signal was sounded on the marketplace, since they were already seen hugging each other on their first rendezvous. Together with their colleagues Astérix and Obelix, they conquered the hearts of the many of the spectators, who were gathered around the market square in no time at all. As did the many other performers, who paraded down the cobbled walkway in the heart of the city on Monday evening giving a foretaste of the show programme that will be offered over the coming days of the show, including first and foremost the Opening Ceremony. The colourful procession was not only made up of wonderful Camargue horses, the whole diversity of the French draught horses and magnificent carriages from the French national stud, Haras Nationaux du Pin, members of the Garde Républicaine and the best French pony riders on cute Shetland ponies were also on board. The partnership has been supported by the Ministry of Foreign Affairs.

In addition to “Le Bagad de Lann-Bighoué”, the “Trompes du Pays de France” under the direction of Arnaud Gritti provided the fitting musical accompaniment.
The exceptional convoy of carriages, which travelled from the Soers to the market square was traditionally headed by the City Riders of Aachen. They also safely escorted France’s Minister of Sports, Roxana Maracineanu, and Anne-Marie Descôtes, the French Ambassador in Germany, to the pulpit of the Town Hall. “Aachen is a symbolic place for the alliance between Germany and France. So, we are very proud be such a special part of the CHIO Aachen this year,” the Minister commented, visibly impressed. Carl Meulenbergh was also delighted with the choice of this year’s partner country: “In France, we have found an extremely horse-loving nation as our partner country, which will inspire us throughout the entire week with splendid show performances.” Aachen’s Lord Mayor, summed up the mood of the evening in a nutshell: “Today, we are all a little bit French.” 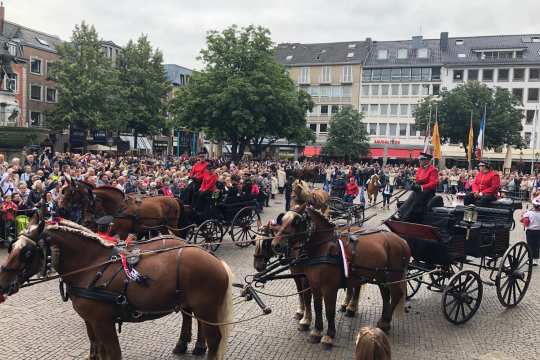