Not to be missed: Soers Sunday

Soers Sunday has been an integral part of the CHIO Aachen for 21 years and is one of the most popular events. That is not only because on this day the guests can explore the CHIO showgrounds with free admission, but also because an exciting supporting programme is offered. The CHIO Aachen Village with over 230 exhibitors in over 250 tents as well as various catering stands also opens its doors.

Around 30,000 people are expected to attend this year’s Soers Sunday on July 14th, upon invitation of the Aachen-Laurensberger Rennverein e. V. (ALRV) with free admission. The programme kicks off at 11.30 a.m. with an open-air Ecumenical Service in the Deutsche Bank Stadium. This year’s motto: “Hubertus Mass – safely guided on eagle’s wings”. Subsequently, a diversified programme will be offered for the entire family at different locations across the showgrounds.

Between 1.00 p.m. and 4.00 p.m., the visitors can watch a “CIAT – International Traditional Driving Competition”. Nicely turned-out historical carriages and drivers clad in traditional costumes will whisk the spectators away into another era. The afternoon programme in the show-jumpers’ practice area gets underway at 1.30 p.m. After being greeted by the CHIO Aachen mascot, Karli, the extensive arena will be conquered by several performers. On display among others: A drag hunt, the five disciplines at the CHIO Aachen and birds of prey from Hellenthal Wildlife Park. Since France is the partner country of this year’s CHIO Aachen, French flair can’t be missing of course: The world-famous Camargue horses will be on board together with the “Connemara Show Team”, which under the motto “Irish Connemaras on a trip to France” will present a colourful show performance with the participation of 20 ponies. On the topic of France: If a shopping spree round the CHIO Aachen Village is planned, the “Rue France” should definitely be on list of places to visit. Here various stands, country-specific specialities and even an Eiffel Tower “en miniature” await the visitors. A nice coincidence: Soers Sunday falls exactly on the same day as France’s national holiday, “La Fête Nationale Française” – or as one says in French “Le Quatorze Juillet”. Double reason to celebrate! “The people of Aachen simply love ‘their’ Soers Sunday. Many of them have been planning it as a regular family outing for years,” explained the Show Director, Frank Kemperman.

However, there is plenty more for the small guests to discover on Soers Sunday: Pony riding is on the agenda as well as viewing the play trailers of the Rhenish State Youth located alongside the Driving Stadium and an exciting “Children’s Educational Trail”, which equipped with a stamp card involves different stations being visited. Furthermore, on Soers Sunday in the scope of the charity cooperation, the “Lucky Moments Campaign” the four therapy centres from the region will put in a show performance for the public called “Vive la France – Therapeutic Riding in Aachen” starting at 2.55 p.m. on the show-jumping warm-up area, whilst volunteers collect donations for this campaign all over the showgrounds. The Carnival Prince elected for 2020, Martin Speicher accompanied by his court, are actively supporting the campaign this year under the motto “All inKlusiVe!”. 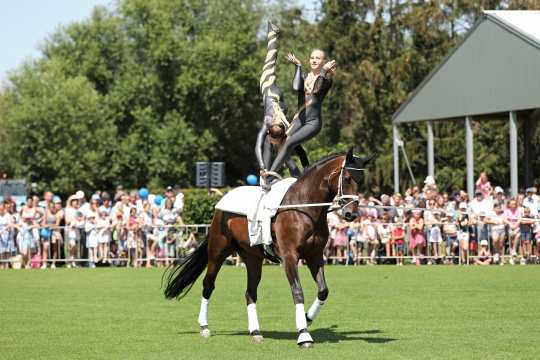