Nominations for the Silver Horse

Over 40 journalists and onliners, social media stars and media companies have submitted entries – three of them were now nominated for “The Silver Horse”. The equestrian sport online and social media award.

The Silver Horse was the most famous media prize in the areas of print, TV and radio for 30 years. For the past four years it has been paying tribute to the changing media landscape and is conferred as an “online and social media award”. The jury – comprising of Wolfgang Brinkmann (President of the German Riding and Driving Association, DRFV), Nadine Capellmann (dressage rider), Michael Mronz (General Manager of the Aachener Reitturnier GmbH), Tobias Königs (Director Social Media/CHIO Aachen), Dr. Ute Countess Rothkirch (DRFV board member) and last year’s winner Astrid Appels – were impressed by the diversity and quality of the submitted entries. These included both blogs and social media platforms as well as classic media, which have mastered the transformation into the digital world in totally different ways.

The following were nominated (in alphabetical order):

Dominique Wehrmann for her blog articles “On the way to Poland, support for the Ukraine” on www.st-georg.de

The winner will be announced during the Opening Ceremony of the CHIO Aachen 2022 on June 28th.  The winning entry will be awarded the “Silver Horse” and prize money to the value of 3,000 Euros. Second place collects 2,000 Euros and third place is endowed with 1,000 Euros. The prize is jointly organised by the German Riding and Driving Association (DRFV), the Aachen-Laurensberger Rennverein e.V. (ALRV), Gina Capellmann-Lütkemeier and Nadine Capellmann. 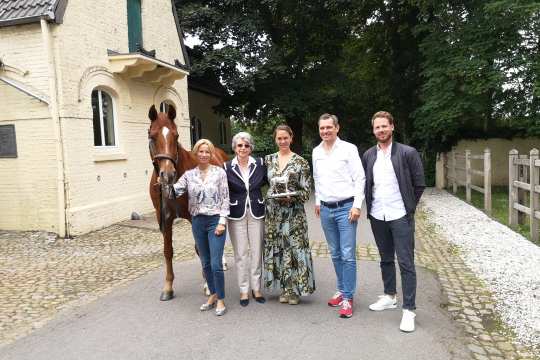