Direct hit for Brazil’s Eduardo Menezes on his CHIO debut – first time in Aachen, first competition and a victory straight off!

“It is incredible how many people are here on the Tuesday already,” said the amazed Brazilian rider, Eduardo Menezes, who lives in the USA, after doing his lap of honour in the Main Stadium of the Soers to the applause of the crowd. He had just won the opening jumping class of the CHIO Aachen, the STAWAG Prize with his 13-year-old Oldenburg-bred mare, Caruschka by Caspar. And in what style! He finished the course almost two seconds faster than the rest of his fellow competitors. That was no coincidence either: “When I ride, I want to win! And if I don’t succeed it is not because I didn’t try hard enough,” revealed the 37-year-old with a wink. Caruschka is his “speed horse”. Tomorrow in the Turkish Airlines-Prize of Europe, Menezes will be saddling his Olympic horse, Quintol, with whom he competed in Rio in 2016. So, his fellow competitors will have to watch out!

For a long time it looked like the Dutch rider Aniek Poels and the eleven-year-old Cornet Obolensky mare Cosma Go would win the class after reaching the finishing line clear in 61.01 seconds. But then Eduardo Menezes entered the ring with his grey mare and raced over the finish line in a time of 59.36, which meant Aniek Poels had to make do with second place.

Marcus Ehning, who is famous for his immaculate style, came third on the horse that he won the final of the Sparkassen-Youngsters-Cup with last year, the meanwhile nine-year-old Hanoverian-bred mare, Calanda by Calido. At the time Ehning said that Calanda could be his next superstar. Although he is actually not a man of many words, back then he raved that “Calanda is a fantastic horse”. She certainly proved that again today, when she jumped clear in 62.16 seconds to finish third.

Diverse other pairs jumped clear, took things easy in the opening jumping, preferring to kick of the World Equestrian Festival with a good performance, such as for instance Laura Klaphake, who is nominated for the Nations’ Cup on Thursday and who is making her debut in the regular classes. 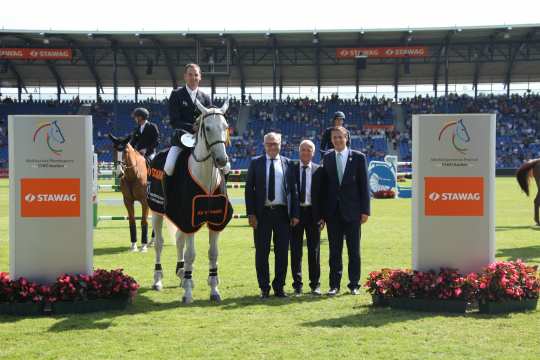