At the CHIO Aachen 2023, Alexander Flocke will be responsible for designing the courses of the four-in-hand drivers for the first time. The 58-year-old from Overath, Germany, will thus be taking over the reins from Dr. Wolfgang Asendorf.

Asendorf leaves behind a great legacy: He was Course Designer at the CHIO Aachen twenty times and repeatedly demonstrated his special feeling for demanding and at the same time fair courses – which was also the case at the FEI World Equestrian Games at the Aachen Soers in the year 2006 and the many World Cup shows and further international Championships such as the Four-in-Hand Driving World Championships in Breda (NED) in 2016 or the World Championships in Tryon (USA) in 2018, where he took on the role as Technical Delegate.

A special association connects the two course designers. Dr. Asendorf was namely the examiner in charge when Alexander Flocke took his examination as a Course Designer over 20 years ago. The beginning of a career, which has taken Flocke to many famous places in the meantime. He was the regular Course Designer in Dillenburg for many years, in addition to which he was among others also responsible for building the courses in Kronenberg (NED), Lisieux (FRA), Lipica (SVN) and Schildau. In the year 2020, the passionate equestrian was promoted to level 4 by the international equestrian sport association, the FEI, which is the highest level an international course designing can attain.

“Steering a carriage pulled by four horses through obstacle combinations is a huge challenge,” is how Flocke describes the fascination of the driving sport. A challenge for the horses and the drivers, but also for the Course Designer: “I feel my task is to offer routes and obstacles that are both demanding and fair for horses.” The reason Flocke likes to implement generous obstacles with several alternatives in his courses: Short, tricky routes for the absolute world elite and further, easier alternatives for less experienced participants or young horses, who are picking up initial experience in advanced classes. Always with the goal of presenting the fascination of the sport at its very best and enabling the athletes and the spectators to enjoy as much fun and action as possible.

“From past shows and other fantastic tournaments, we know that the courses Alexander Flocke creates promise great sport,” Birgit Rosenberg, Board Member and Director of Sport at the Aachen Laurensberger-Rennverein (ALRV), said, delighted about the future collaboration. And Alexander Flocke is also eagerly looking forward to the CHIO Aachen 2023. He admitted that it is indeed a slightly awesome prospect, but “that the honourable task of being part of the World Equestrian Festival is paramount.” And Dr. Wolfgang Asendorf has already given him a few tips for his premiere at the Aachener Soers next year: “Which I gladly accepted, of course. After all he is one of the most famous Course Designers of the past twenty years.” 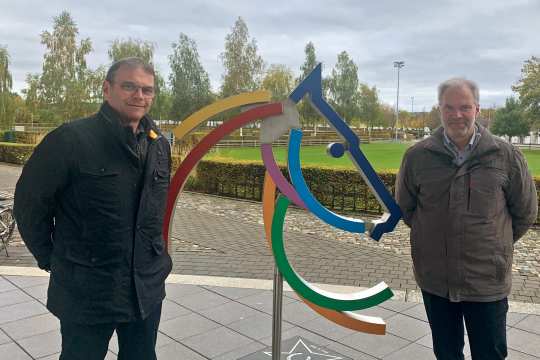