The CHIO weekend in July 2018 was a total success for the German vaulters, who won all of the major competitions in the Prize of Sparkasse. As the crowning glory they also claimed the top two places in the Nations Cup – and delivered a nail-biting duel in the process!

Everyone at the showgrounds in the Albert-Vahle Arena were eagerly awaiting the two favourite teams: Germany II with Team Norka from VV Köln-Dünnwald and the individual vaulters Thomas Brüsewitz and Sarah Kay and Germany I comprising of Kristina Boe, Jannik Heiland and yesterday’s group winners, Fredenbeck I.

Germany II were first to go. Thomas Brüsewitz, Team Norka, Kristina Boe and Jannik Heiland put in a convincing performance and were awarded a total score of 25.479.

And then the time had come: Stage free for Fredenbeck, the Team Germany I! The group in particular gave the freestyle performance of their lives. They already conquered the hearts of the crowd yesterday. But when towards the end of the routine Viktor Brüsewitz balanced the nine-year-old Mirja König in the air standing on his arm stretched out to the side, the crowd’s mouths gaped open in amazement. But would it suffice to leave the team from Cologne that is already nominated for the World Championships in Tryon behind them?
It sufficed indeed. With a total score of 26.276, the group asserted itself against Germany II (25.479) and Austria (24.482), ahead of Italy (23.506), Switzerland I (23.195), USA (22.914), Switzerland II (22.172) and Russia (19.049).
The troop from Fredenbeck could hardly believe their luck: “It is simply indescribable! We would never have thought it possible,” were their comments. And: “One simply can’t describe it in words!” Whereby the national coach, Ursula Ramge, did just that: “The group from Fredenbeck have excelled here!” She also praised the remaining athletes. The Chef d’Equipe explained this was totally in line with the expectations, stating once again: “The best possible sporting conditions prevail here in Aachen. And the atmosphere is the same as at a World Championships.” 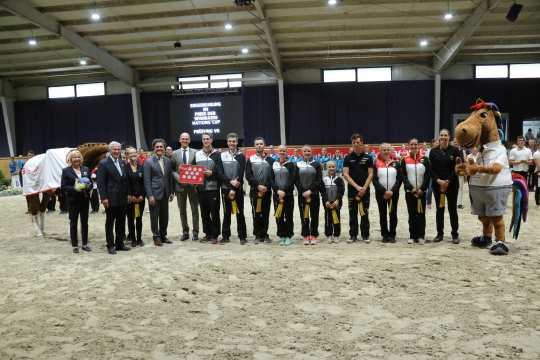